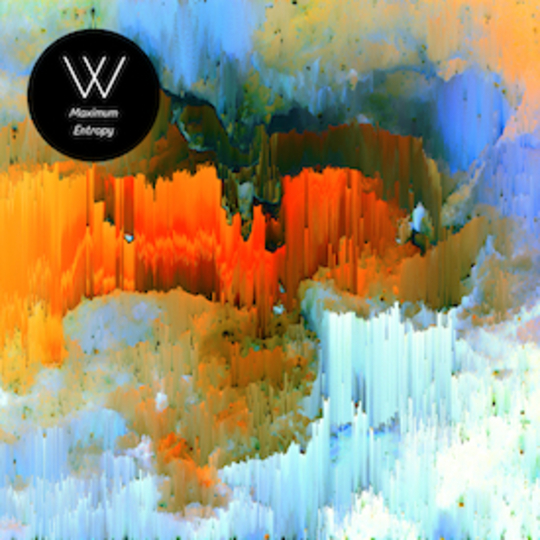 Don't let the name deceive you. Man Without Country operate under a strict set of laws, codes and rules. The Welsh pair stalk a very specific terrain, one characterised by near-glacial tones. Light is but a rare glimmer on a horizon bathed in pronounced gloom.

You may well argue that this is the very nature of moody electronica, that in order for that glimmer to shine through and burst accordingly we must be patient and endure. For the first ten minutes and change at least, Maximum Entropy gets the balance right. 'Claymation', busy and bright, serves as such a good starter's pistol that the more methodical 'Entropy' feels less of a comedown and more the feeling of muscles relaxing. Both are awash with genre tropes; ethereal and distorted voices, mechanical percussion, the sense of something other within reach. 'Laws of Motion', bolstered by searching vocals from White Sea and M83's Morgan Kibby, floats amidst playful glamour.

In truth, it feels rather lightweight, as do much of Ryan James and Tomas Greenhalf's more adventurous flourishes, seldom though they are. As the narrative unfolds, nothing arrives at the punch of promising earlier efforts such as 'Inflammable Heart' and its frenetic kick-in or the dark guile of 'King Complex'. Instead, the focus emerges on absolute endurance as the building blocks become heavier and more atmospheric. 'Oil Spill', 'Loveless Marriage' and 'Deadsea' are about as optimistic as their titles suggest and while all three achieve a certain salience, it can be a bit of a slog getting there.

There exists the feeling that Man Without Country are keen to test patience. That's cool, everyone should respect a challenge. The reward, however, is insufficient. Take 'Catfish', for instance. There's a nervous dance floor tension throughout that stubbornly refuses to transcend into a necessary payoff; the conclusion ultimately meek and mild to the point of frustration. Like so much of what follows, it registers as an accomplished but cold art installation; something to admire rather than necessarily enjoy. That aforementioned last act ranges from middling to meandering, the lifts too faint to make a lasting impression.

Finally, real connection returns. Sweet relief. Or, rather, 'Sweet Harmony'. Yep, that one by The Beloved with that once-shocking video. A glorious song here reborn in glorious fashion where James' apathetic vocals dance confidently and gently soar. Alas, the cover is at once Maximum Entropy's greatest boon and burden, for it prompts the listener to make unreasonable and arguably insulting demands of an outfit who are content to have their flag planted in murky and rigid ground. Still, you can't help but wish for the clouds to clear and a snappier, poppier expanse to be realised. On the strength of this strange closing declaration, one hopes that Man Without Country elect to brandish sharper hooks as their republic continues to take shape.