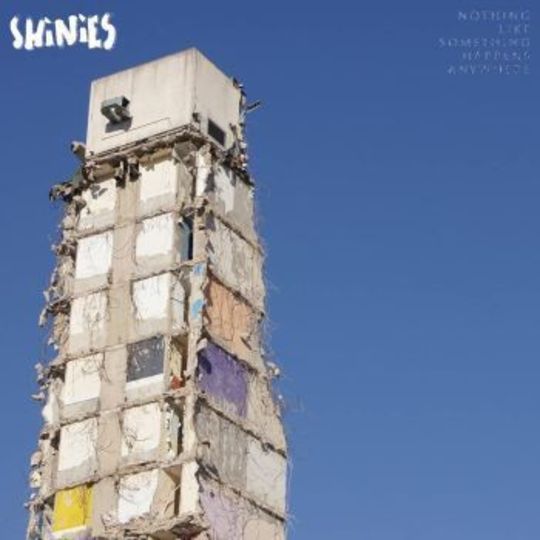 Three years ago, Manchester four-piece Shinies were one of the city's most hotly-tipped bands. Debut single 'Shola' and the follow-up 'Ennui' highlighted their potential as classy exponents of noise-tinged guitar pop, a statement wholly reaffirmed by the band's third release Tangle in August 2013. As well as introducing them to the production talents of Hookworms' MJ, it also gave them the impetus to pull the reins in, take stock of their lot and plan that all-important next move. While last year may have been barren in terms of putting out new music - bar Xmas single 'Boxing Day' - it proved a wise decision in the long run, allowing them to go away and get on with the job of creating and constructing their first long player.

And if Nothing Like Something Happens Anywhere is anything to go by, it was the right move. Having teamed up with MJ once again, they've delivered an impressive collection of songs without experiencing the pre-ordained hyperbole which greeted them after those early 45s. While none of Nothing Like Something...'s nine pieces are exactly a million miles away from Shinies' initial recordings, they're an earnest representation of the band's musical development and progression as songwriters. Taking its moniker from Philip Larkin's epic 'I Remember, I Remember', Nothing Like Something Happens Anywhere is the sound of a musical ensemble exercising a poetic licence of their own jurisdiction.

Indeed, for a band lazily dismissed by some as a gimmick act for featuring Eighties DJ Pat Sharp in one of their videos, they've honed an instantly recognisable signature sound. In particular the woozy, wavering guitar of Ric Stringer, whose distinctive bursts underpin the title track and luscious 'Beaches' with raucous, yet crisp aplomb. Lyrically, there's a bleakness to vocalist and fellow guitar player Adam Davison's musings. Opener 'Pomona (Intro)' finds him "Waiting for something to happen, yet it never does." Such tales of boredom and despair could probably only emerge from somewhere as grey as the North West of England, and yet for something so downbeat at heart there's an uplifting presence in the way Shinies carry out their chores.

While it would be harsh on Shinies to cite MJ's studio wizardry as a defining point, his production techniques come to the fore in the way 'Pomona (Intro)' segues effortlessly into 'Nothing Like Something Happens Anywhere'. A similar sequence occurs at the album's midpoint, 'Soak''s laidback lo-fi pop drifting instinctively into the brashly executed 'Waves'. Elsewhere, 'de C' could almost be Primal Scream pre-Sonic Flower Groove re-imagined by Hookworms before a tidal wave of guitars rock its very core.

It would also be wrong not to give credit where it's due to Shinies' rhythm section. Joe Fisher's teasing basslines playfully engage with Tom Haben's shimmering drums, providing a more than ample backbeat for the vast array of sounds surrounding them. The punch drunk pop punk of 'Spent Youth' takes its cue from early nineties scuzz rockers like Midway Still or The Edsel Auctioneer, while '6's & 7's' buries itself in a waterfall of affected guitars and blustery vocals, Davison grimly "Searching for excitement."

By the time 'Made To Waste' chimes gleefully into action like a modern-day version of The Jam's 'Tonight At Noon', Nothing Like Something Happens Anywhere manages a wry smile before drawing to its natural conclusion. Bold and vibrant yet equally fragile and sentimental, Shinies have concocted an album that proves heartfelt and endearing as a result. In other words, definitely worth the wait.