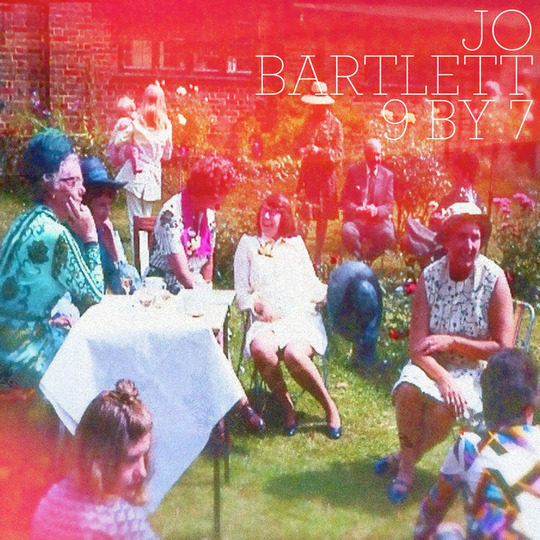 Jo Bartlett remains best known as the co-founder of the beloved Green Man Festival and, much like the event she brought into being, she’s usually pegged as a folkster. But Green Man’s curation always reached much further than folk, and that diversity of taste is reflected on Bartlett’s first solo LP, 9 x 7. While her former duo It’s Jo and Danny was more squarely guitar-based and folk-focussed, and her instrumental outfit Yellow Moon Band lurched towards the psychedelic, 9 x 7 melds these two halves and adds extra electronic influences to the song writing to boot. The results are promising, if mixed.

9 x 7’s strongest suit is its ability to contrast a lot of sounds in the space of half an hour. Opening track (and lead single) ‘Dying Kiss’ reaches for the epic on a bedrock of synth, before smash cutting up against a wistful swirl of strings at the front end of ‘Measure for the Storm’. It’s billed as a solo album, but it’s some of the most fleshed out and far reaching arrangements that Bartlett has been part of, and she’s wise to support her wavering vocal lines with the full bodied texture of six other musicians.

It’s unfortunate that a lot of the instrumentation is captured so lifelessly. The choruses of songs like ‘Rising To the Bait’ and ‘Advent’ unfurl pleasantly, if predictably. But it’s hard not to wish that the arrangements weren’t given production that popped a bit more.

An album highlight comes in the form of instrumental piece ‘Olympic’, where the physicality of the instruments is allowed a full round sound; the galloping low notes contrasting with the delirious strings – creating one of the few moments where the extensive seven piece actually sounds like its number. Elsewhere, hooks are let down by murky backdrops: barely audible drums shuffling to a murmur; synths and strings competing rather than complimenting.

The best moments are the ones which take the most chances, and get the furthest from the middle of the road. The weirdness of ‘What Do You Say To That’ pays dividends for Bartlett, with her echoing voice cascading over a grabby little guitar lick; letting the production do the heavy lifting rather than the song itself. The most conventional of the songs are the ones which throw Bartlett’s weaknesses into sharpest relief: the strain of overwrought melodies like that of ‘Dying Kiss’, and the cringe factor of similes like “[she’s] defying all reason / like a nuclear race”.

The pace of the thing pulls the listener along with it, but ultimately Bartlett gets the balance between playing it safe and taking fruitful risks a little wrong on 9 x 7. It’s wonderful to hear her play to so many of her influences at once, and with such an array of instrumentation to splash colour all over her ideas. It’s just a shame that the production so often puts the focus on the most pedestrian aspects of the songs, rather than Bartlett’s more adventurous impulses.