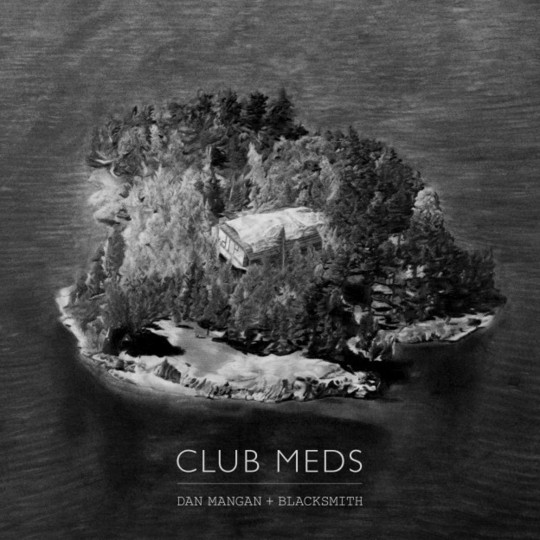 New year, new start. Informed by December’s indulgences, reflections are made and answers sought, the promises we make to ourselves glimmering like tiny lights in the January gloaming. Dan Mangan is certainly taking the initiative; 2015 has barely begun and already we have Club Meds, his exquisitely-titled - and frequently just flat-out exquisite - fourth record. Fittingly, it’s like a debut in being a new endeavour, released under a joint name to reflect its collaborative genesis with long-term backing band Blacksmith. A product of reassessment then, it’s in keeping with the spirit of the season. Best of all, it’s a bold record of resolve - not so much a twinkling light as a searchlight scraping the sky.

However, its charms are not often writ large; its depth is subtly, slowly realised. ‘Vessel’ grabs the attention first. Its gleeful, syncopated stride stirs from a mix of playful piano and drums, rising to a cacophony of brass, like a horse suddenly unbridled. Yet once its refrain of “[it] takes a village to raise a fool” is picked out the nuance nags away; it’s really a song about constriction, of the danger of a sort of pinched worldview that many have or have forced on them. Then the musical phrasing suddenly feels tight and shackled despite its pretence at thundering along. Instrumentation informs interpretation.

Being the most direct of the songs on Club Meds it was a fitting lead release, its charming rattle providing an invigorating facade and its simple lyric acting as an invitation to look deeper. To do so regularly blows the album open, showing it to be a record capable of casting its hooks deep. Mangan is a songwriter of some repute in his home country of Canada but now his material, which previously erred towards the folksy, cutesy side of the spectrum, has suddenly tipped into the strident, existential and often political. That it works is thanks to Blacksmith; it’s the musical collaboration, the building from the ground up, that ensures the real potency of his messages, making sense of the whirlwind of thoughts flung across the songs.

‘Offred’ makes reference to Margaret Atwood’s The Handmaid’s Tale to highlight misogyny and control, its brooding, gilded sorrow in metronomic samples, sputtering static and meadowy guitar, both surety and chaos coexisting. ‘Forgetery’, a song about somatic denial, is suitably concussive, building and reaching with strident indie rock purpose on choppy guitar before it falls away, grasping, into a cell of treated synths and looping electronics, like a knock to the temple.

Yet there are two songs that redefine Mangan’s work. ‘XVI’ thought provokingly recasts class war as class difference, more a mutual exclusivity and tragic disconnect between human beings, and pitches mournful acoustic guitar against bright rococo strings. Framing its narrative around Louis XVI and Marie Antoinette, the punch to the gut is the use of the infamous ”let them eat cake” line at the song's denouement as it spins off into an austere and beautiful baroque waltz. Even better, ‘Mouthpiece’ is the record’s open nerve. A shuddering diatribe on the importance of art - “I to want to breathe in all the ashes of books they tried to burn” - and the dangers of not questioning the world around you - ”those who pretend to believe hardest might actually begin to.” - it makes its points without ornament, robust acoustic guitar, brushed drums and goon squad moans the bed for Mangan’s fearsome delivery.

Club Meds is a record of craft and honesty, but it’s never preachy, preening or self-important - and that’s its greatest achievement. Indeed, the more fulsome material is often followed by the gnomic, resulting in an interesting push/pull throughout. The abstractive retreats of ‘War Spoils’ and ‘A Doll’s House / Pavlovia’, with lyrics almost dispassionately intoned and buried in a mix of whining synths and muffled strings, sound like the shuffling of medicated patients. Macabre and intriguing at the same time, they save the album from being single paced.

Mangan emerges a songwriter re-energised, unashamedly impassioned and literate, a man unmistakably eager to make a lasting mark. Braced by the impetus of a new collaboration, Club Meds feels like a January day; bleakly bare and unforgiving, but that belies its texture and stark beauty, like an Ansel Adams photograph. It’s a pleasure to hear a group take a step forward on a record of reflection and insight, and whilst it may lack a visceral thrill for some and needs to be approached with a careful ear, many will appreciate the nuance, engagement and depth it offers.