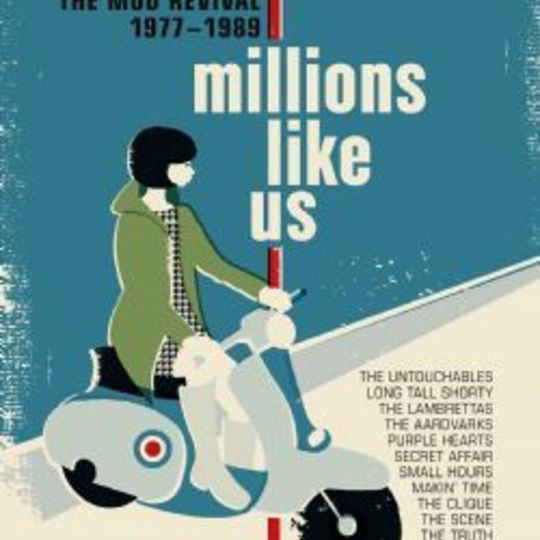 Punk rock may have been a cultural year zero, but the retrospective origins of its ethos shouldn't be ignored either. While the genre's first wave arrived sporting spittle-stained bondage trousers and three-chord tirades challenging the establishment, post-punk's divisive mantra heralded a more DIY approach. The history books tell their own story - literally - about what happened next: preferring to dress up everything alternative post-Sex Pistols as a landscape of originality and creativity, yet at the same time choosing to ignore a lot of what was really going on in the musical underground.

Love them or loathe them, mod fashions were all the rage at the time, partially inspired by The Jam – who despite being an integral part of punk rock's beginnings, clearly sought influence from another generation's youth culture altogether. Around the same time, Franc Roddam's Quadrophenia had a significant impact as teenagers and their peers flocked to cinemas in droves to catch a glimpse of Phil Daniels and Leslie Ash re-enact the infamous bank holiday rivalries of the Sixties. Co-written by Pete Townshend and soundtracked by The Who, it undoubtedly introduced a new generation to the styles and sounds of that era.

Which brings us succinctly onto Millions Like Us, a mammoth four-CD compilation containing 100 songs by almost as many artists. Housed in a box set that also doubles up as an informative magazine-style booklet offering descriptive biographies of each contributor to the compendium, it documents the Mod revival from the back end of punk in 1977 through to the tail end of the following decade when the fashion and its music had pretty much become by-words for ridicule. Pre-dating Britpop by a decade-and-a-half, it wasn't so much a revival but more a period of discovery for many of its leading protagonists. Upon listening to Millions Like Us from start to finish, it's actually difficult to differentiate what separated many of the bands featured here from those associated with the punk scene.

However, what is clear is the unabated influence Paul Weller had on many of the bands that followed The Jam. Take Barking foursome The Combine for example. Not content with naming themselves after a song on the second Jam record This Is The Modern World, their contribution here 'Dreams Come True' sounds for all the world like it could have been a lost relic discovered on the cutting room floor long after the Woking trio's acrimonious split in 1982. And it goes on, a similar sound magnified by Dagenham's Untamed Youth ('Untamed Youth'), Shepherd's Bush combo The Directions ('Three Bands Tonite'), Chelmsford's The Accidents ('Blood Spattered With Guitars') even reaching as far as Sydney in the shape of Australian power poppers Stupidity ('Bend Don't Break') and Dublin where The Blades ('The Last Man In Europe') onerously live up to their billing as 'The Irish Jam.'

That there's even a Jam cover here in the shape of The Jolt's take on 'Eton Rifles' b-side 'See Saw' might be enough to switch curious bypassers off were it not for the treasure trove sitting gracefully alongside it. Because make no mistake, despite the revivalist ethos there were also a lot of genuinely innovative acts to emerge from the Mod scene. For instance, little known outfit The Reaction only released one single for Island ('I Can't Resist') before imploding. Listen closely and you'll recognise the vocal as being that of Mark Hollis, later to re-emerge with Talk Talk. Meanwhile, teenage Rhyl-based quartet Seventeen may have been celebrating the 'Bank Holiday Weekend' in raucous style before splitting in 1981 it wouldn't be long before the band reformed under a different moniker, The Alarm, where they'd go on to enjoy both critical and commercial acclaim. West Midlands four-piece Makin' Time may have been heavily indebted to the second coming of Weller and The Style Council if their contribution here ('Here Is My Number') is anything to go by, but it wouldn't be long before bass player Martin Blunt returned with his new band, The Charlatans. See also The Nips, whose 'Gabrielle' features a young Shane McGowan on vocals alongside Q-Tips 'S.Y.S.L.J.F.M. (The Letter Song)' where soon-to-be pop sensation Paul Young provided the voice.

Many of the bands on Millions Like Us did go onto achieve a degree of success in their own right. For example, London's Secret Affair became the unofficial leaders of the scene thanks to debut single 'Time for Action'. Released in the summer of 1979, it became a rallying cry with its clarion call, "Looking good's the answer, and living by night". While stalling commercially after third single 'My World' - also included here - peaked at number 16, their influence proved a key factor in many of the bands that formed later that decade. The Lambrettas might be better known for their cover of The Coasters' 'Poison Ivy', a top ten hit in 1980, but their two contributions here 'Go Steady' and 'D-a-a-ance' suggest they were more than capable of penning incisive, punchy three-minute power pop ditties themselves. Nine Below Zero amassed a cult following on the London pub rock and blues circuit towards the end of the Seventies, and by the turn of the following decade they'd signed to A&M, releasing three albums until splitting in 1982. The previously unreleased demo version of 'Pack Fair And Square' included here provides a raw insight into the band's roots, owing more to the likes of Dr Feelgood or Nick Lowe than any nascent Mod resurgence. After Nine Below Zero's demise, singer Dennis Greaves went on to form The Truth, and their soulful debut 'Confusion (Hits Us Every Time)' is another welcome inclusion here.

With so many highlights across each of Millions Like Us' four CDs, its impossible to pick out any one in particular but The Crooks 'Modern Boys' bears a passing resemblance to Senseless Things fraggle rock a decade or so later while The Times 'Red With Purple Flashes', released on Dan Treacy of the Television Personalities label Whaam and The Way Out's 'Time Moves Us On' deliver the prototype for the ensuing C86 scene's arrival a couple of years down the line.

There's worse things to spend those Christmas record tokens on than this: nostalgia at its most reticent, ignoring the obvious cliches of course...