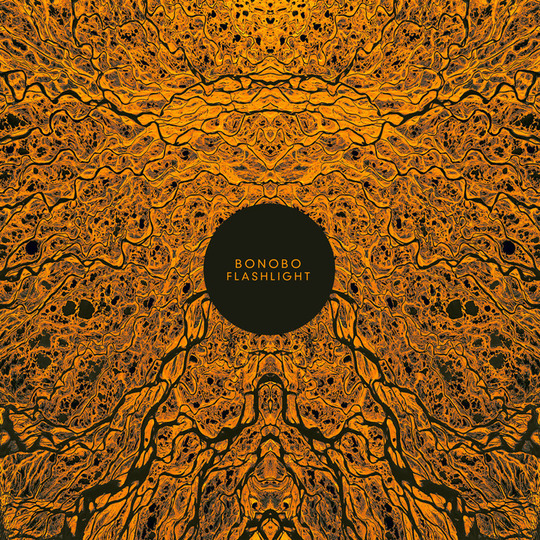 An increasing number of our favourite artists are deciding to unleash new material just as the year is about to expire (no, I don’t mean Television X’s Christmas single): December 2013 saw new and non-seasonal releases from the likes of Beyoncé and Childish Gambino, catching out critics and list-of-the-year compliers by refusing to conform to the regular, commerce-driven release schedule.

And now Bonobo, aka Brighton producer Simon Green, can be added to that list of pesky non-conformists, providing us with some much-needed glad tidings of joy. The Flashlight EP arrives as the bitter winter winds howl in, the temperatures drop below freezing (unless you happen to live in the southern hemisphere, in which case – we all hate you), and we retreat to the embracing sanctuary afforded by the warm glow of our iTunes/vinyl collection/CD rack.

Although he released an ‘EP’ of sorts back in June with the single ‘Ten Tigers’, Flashlight actually delivers three brand new, non-remixed tunes for Bonobo aficionados to lose their shit over - whilst providing an enticing fix for those who aren’t yet ordained in Animal Magic. Off the back of his excellent fifth album The North Borders last year (as well as a stunning, must-have compilation for the -Late Night Tales- series) is a Bonobo support base that’s never been bigger – evidenced by the fact that …Borders was Green’s first record to actually chart – which of course means that more eyes than ever will be fixed on his latest foray into blissful electro. But does Green crumble under the pressure? Oh, hell no.

Honestly, acquiring the Flashlight EP will most likely be the best £1.79 that you’ll have spent all year. Its three tracks differ in sonic texture enough to provide a welcome sense of variety, exploring the immense possibilities of electronica in a way that’s just so… refreshing. Yes, there are beats and drops and hands-in-the-air moments that show off the potentially ugly side of the genre, but the exquisite manner in which Green shapes his instrumental backdrops is the attribute that you really should be focusing on. The title track, whilst equipped with a near-pounding beat, is arguably one of the most blissful things you’ll hear this year, as looped guitar licks waltz with restrained-siren synths.

Second track ‘Pelican’, meanwhile, delves into upbeat house with its crisp, stumbling beat, but never to the point where it becomes overbearing: instead, those low-key synth sirens strike again as indistinct vocal samples drift in and out. What’s interesting here is how Green hasn’t opted to draft in guest vocalists - …Borders saw turns from the likes of Erykah Badu and Szjerdene – which prevents the detraction of attention from what he’s crafting musically, and it’s a tactic that works to his advantage hugely.

Final act ‘Return To Air’ is an example of by-the-book Bonobo, with an aural presentation that could sit well on either The North Borders or its 2010 predecessor Black Sands. With a dipping beat, echoing female vocal snippets, and use of chimes, it’s a smooth piece that is further complimented by some subtle structuring, as nebulous synths dance a sequence at the half-way point.

And then, 16 minutes later, it’s all over. But whilst short in duration, Flashlight is definitely tall in ambition, once again showcasing Green’s adept skills behind the production board. A fine addition, then, to what’s quickly becoming a hugely impressive discography.