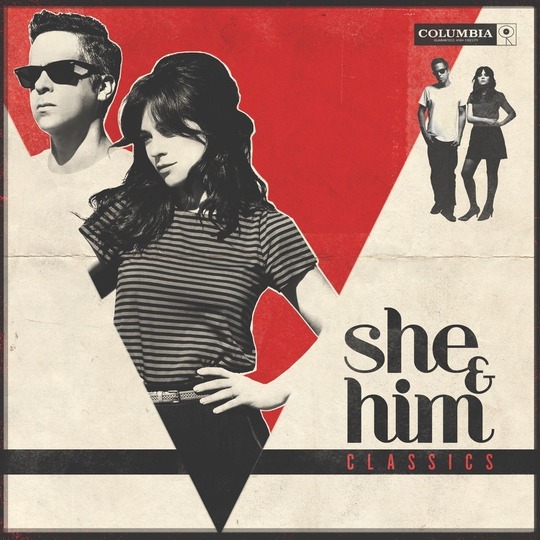 She & Him can wind people up the wrong way, and you can totally see why: they’re a musical distillation of this entire hipster (whatever that means now,) vintage-worshiping, olde-worlde-fetishising, retro-for-retro's-sake world that singer Zoe Deschanel is the living embodiment of. Deschanel may be guilty only of the crime of seeming nice, looking nice, liking nice things, wearing nice clothes and starring as nice people in films, but she doesn’t half get on people's wick. Pair her with Matt 'M. Ward' Stephen, the none-more-indie Portland (natch) singer-songwriter with a hard-on for reverb and obsession with the early Sixties and the result could feel beyond parody. If Saturday Night Live invented She & Him they’d probably drop the sketch for being a bit obvious and unlikely.

Yet the duo are astonishingly popular. Considering they’d be a low-key muso-fetishist niche project were it not for the legit movie star at the front, people really love them. They’ve sold over a million records at a time when bands just don’t shift in those numbers. A lot of it has to do with Deschanel’s fame of course, the records are another corner of the manic pixie dream world she’s created, she sings on camera all the time – in Elf, in 500 Days of Summer and every two minutes in New Girl including the theme song – so you can see why her fans would want to seek out more. That can’t be all of it though: the pair make supernaturally likeable records and there’s plenty of demand for them; this is their fifth album, their second covers collection and their first for a major label, Columbia.

If you’re familiar with She & Him at all, particularly with their first album or their previous covers record, A Very She & Him Christmas, there’s almost no need to listen to Classics, you glance at the tracklisting and you know exactly what you’re going to get- it’s an album of standards, mostly from the late Fifties/early Sixties (although they reach as far back as the Thirties too) accompanied by a full orchestra, and every effort is made to recreate the sound of a classic-era recording. It’s almost a shame not to hear to it through the warm crackle of a rubbish portable record player. The songs are bullet-proof of course: this a well-curated selection of properly enduring standards. It’s hard for anyone to mess up something as perfect as Carole King’s ‘Oh No, Not My Baby’ or Burt Bacharach’s ‘She’, while ‘Unchained Melody’ and ‘We’ll Meet Again’ must rank amongst humanity's greatest, simplest, most expressive achievements in whatever version they’re recorded. Deschanel and Stephen simply do what they do: unshowy arrangements with an emphasis on analogue warmth. It’s a satisfyingly elegant approach. Whether this brings anything new to the table is up for debate – is She & Him’s version of ‘Stay A While’ any better than Dusty Springfield’s? Obviously not, but then frankly few things in this world are. Most renderings here have a more laid-back and loungey approach rather than emulating the bombast of Spector-sounding Sixties balladry, which is probably for the best, allowing the songs to do the work for then.

Not that there isn’t skill on show here, in an understated way. M.Ward’s trebly guitar always finds its mark, and while Deschanel is often accused of being lightweight she’s really a fine singer with a lovely tone, capable of surprising you when she hits the money notes, proving she’s not unworthy to tread the same ground as Billie Holiday and Ella Fitzgerald on ‘Stars Fall On Alabama.’

If there’s a fault it’s that the duo are a little too comfortable. When they do step outside the template, as on a deconstructed reading of ‘Unchained Melody,’ they manage to raise the songs beyond cosy tributes. Alas such moments are too few and far between for these versions to come anywhere close to the defining recordings they’re nodding to. Some of the ramshackle charm that pervaded their Christmas record is missing here too - the major label money and the massive orchestra having presumably buffed the edges, which feels a shame. Still, all in, it’s a hard heart that dismisses a solid record of wonderful songs done well.