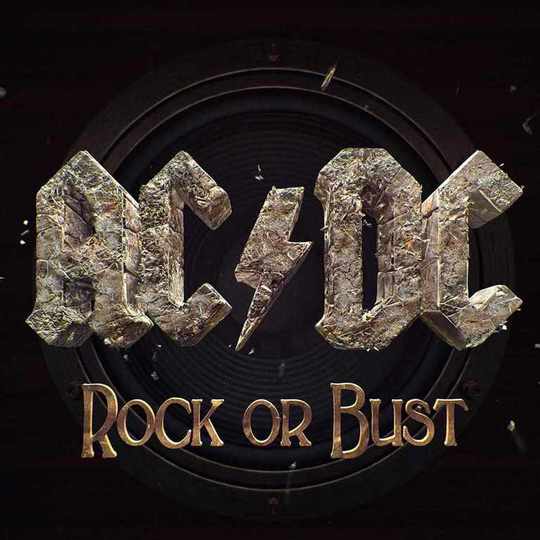 AC/DC are a band in all kinds of disarray. With founder member Malcolm Young out after more than 40 years service due to the onset of dementia and longterm drummer Phil Rudd facing bizarre charges of drug possession as well as procurement of murder and threats to kill, now seems a choice moment to drop their first studio album since 2008’s Black Ice.

Despite the personnel shambles and the fact that the songs on Rock or Bust are largely patched together from remnants of ideas that Angus and Malcolm Young came up with for previous records, AC/DC show remarkable consistency on their sixteenth studio album. They are AC/DC after all. There are four (count ‘em) songs with the word ‘Rock’ in the title and their juvenile humour shines on titles like ‘Emission Control’ (come on now, lads).

There are riffs. Massive chugging riffs and spidery, fiddly-widdly high-up-the-fretboard runs aplenty. Brian Johnson sounds like a volcano puking gravel. The drums sound like CM Punk elbow-dropping semtex. Sometimes a little more like a lumberjack building a tin shed.The basslines rumble along like something else that rumbles along. You get the idea. It is, as Fred Savage would have it in the tragically underrated ‘Vice Versa’ a 'heavy duty rock' album.

Go-to hard rock producer Brendan O’Brien (Springsteen, Pearl Jam, Mastodon) draws out the elemental power of the band on dumb fun beauties like single ‘Play Ball’ (which, while celebrating the band’s desire to party, advises someone called “Sid” to “Dive on in, swim in the gin”, or so it sounds) and opener ‘Rock or Bust’ which opens with the stunning “Hey yeah! Are you ready? We be a good time band / We play across the land”. No-one could accuse them of being anything less than straightforward.

The great thing, though, is that these songs and their compadres – bold blues belters like ‘Dogs of War’ with its ‘Thunderstruck’-like feel and dumb as cocks “Dogs of war/Soldier of fortune” refrain – are eminently enjoyable. They connect on a base level that most bands singularly fail to do no matter how hard they try. It’s formulaic, certainly, and it lacks obvious sophistication, but to be able to grab people by the guts and get them grinning, chanting along, fists aloft – even in their own living room, or, perhaps, with their headphones on in the local Sainsbury’s – is a feat considerably greater than most self-professed 'smart' bands could manage.

Mentioning that they do indeed ‘Got Some Rock & Roll Thunder’ is almost unnecessary, as is their stated intention to ‘Rock the House’. AC/DC’s output is often reminiscent of the most engaging side of braggadaccio-based hip-hop; artists telling you exactly how good it is that they are at what they do while actually doing it at the same time. It’s a strange conceit but it’s probably not a case of AC/DC breaking the fourth wall or attempting meta (stick an ‘L’ on the end?)

So what that ‘Hard Times’ slips by almost unnoticed in a stomp of unmemorable recycled riffola? Does it matter that ‘Sweet Candy’ contains the lines “She do a dance/Slides down a pole”? (A bit, yeah) This is what the word 'unreconstructed' was, er, constructed for and it’s there, in Roc or Bust's brief 34 minutes, to encourage you to rock the fuck out and enjoy yourself.

Admittedly this record is little more than a gateway disc to the upcoming world tour, a sort of pre-passport to the infinite delights of seeing one of the best live bands in the world do their thing in a big ol’ stadium, but boy is it fun. It’s not great, it’s not touching, it’s not…well it’s not anything but autopilot AC/DC, as they have been for many years now and it’s none the worse for that. Fashion, change and indeed disarray entirely fail to touch AC/DC and they are all the better (or rather, just the same) for it.