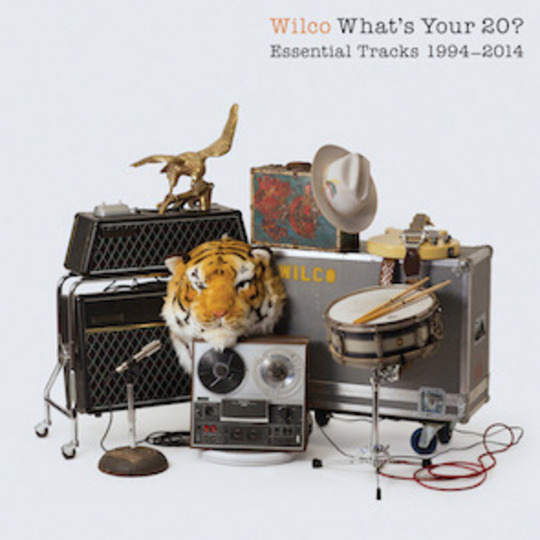 Merry Christmas, folks! Yes it’s that time of year when our reviews editor sends around his list of upcoming releases to be met with a resounding 'meh' as the DiS staff scroll through a roll-call of Susan Boyle albums, pointless re-releases, reality TV losers and pointless cash-in compilations that will soon be adorning a Tesco near you. But wait, what’s this? Surely a band as beloved and revered around these parts as Wilco haven’t lowered themselves to a pointless Best Of?

Well no, they haven’t.

OK they technically have a bit, but there’s really far more to What’s Your 20? than the bog-standard, record label-curated, lazily packaged hits compilation. For one thing… what hits? To put it to the scientifically accurate litmus test, neither of my parents would be able to name a Wilco song so that’s that. This is, if not an important album, then a cut above the usual 'could have made that as a playlist on Spotiy' records.

For one thing, it demonstrates that Wilco are bloody brilliant (this kind of analysis is why I get my name in lights here and you don’t). When What’s Your 20 was announced I had my misgivings: after all, Wilco are a band that everyone got into by discovering how wonderful their albums were, not because they heard ‘War on War’ on the radio. Outside of the context of a 'proper' LP though, the songs reveal themselves as either very good or individual masterpieces, regardless of the band’s fluctuating lineup. From 38 tracks it should feel churlish to give examples, but the likes of ‘Jesus Etc.’ and ‘She’s a Jar’ are so much better than anything by their contemporaries that it isn’t.

More importantly though, What’s Your 20 debunks the lazy notion that Wilco’s evolution can be surmised thusly: alt. country rockers do rootsy, bluesy stuff for two albums, get weird and brilliant for three, go all dad rock for the next three. Fair enough, the AM material does sound a lot like Uncle Tupelo, but ‘Misunderstood’ was the opening track on just their second album and its inclusion here is a neat reminder that, with the distorted guitars, drunken piano and disorienting vocal layers, Wilco weren’t afraid to be experimental at an early stage. Conversely the selection of later tracks – the likes of ‘Walken’ and ‘Whole Love’ – demonstrate that Wilco are still, at heart, a country band.

The only quibble here is whether or not these are all, truly, “essential” tracks. When the band has eight better-than-most albums’ worth of songs to choose from, plus a bunch from the three Mermaid Avenue records (here represented by the glorious ‘California Stars’ as well as ‘Hesitating Beauty’ and the wonderfully raucous ‘Airline to Heaven’), though, such quibbles will always depend on the individual listener and thus be rendered minor. What’s Your 20? will inevitably bring cries of 'Where’s [deep breath] ‘Summer Teeth’/‘Dreamer in my Dreams’/‘Pieholden Suite’/‘Art of Almost’/‘Bull Black Nova’/‘Dawned on Me’/‘Wishful Thinking’/Any of the five songs from Yankee Hotel Foxtrot that aren’t here?' but that by-no-means-exhaustive list makes the answer self-explanatory.

Still, Wilco’s strongest material is best represented here, with Summerteeth and Yankee Hotel Foxtrot being afforded six slots each. The last three albums, on the other hand, only get nine tracks between them. If we’re nitpicking that’s a bit harsh on Nels Cline’s outrageous talent, but on balance probably fair enough. There’s also a pleasingly healthy serving of pre-Summerteeth material, with which the more casual fan might be less familiar.

What’s Your 20 probably won’t win the band new fans. After all, if this kind of music is your thing then you already know who Wilco are and Radio 2 are unlikely to be playing ‘Handshake Drugs’ any time soon. It’ll make a great addition to fans of the band’s vinyl collections though, or will spend a long time in the car CD player (I don’t drive: do people still have those?). It’s one for the wider music aficionado too though, a fine opportunity to appreciate the best band of the past 20 years.