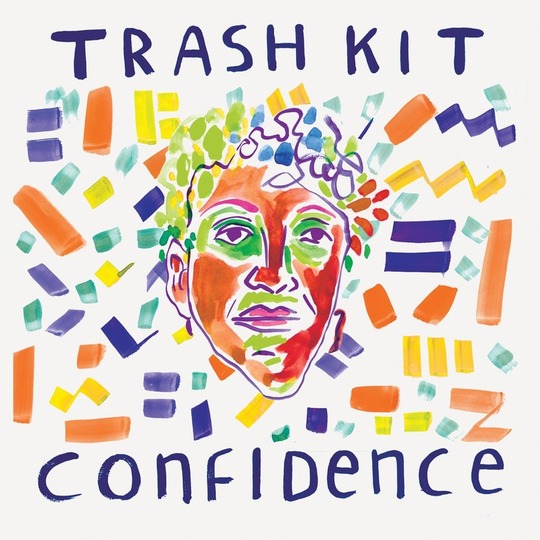 The last time we saw Trash Kit, they were rising like some sort of lo-fi phoenix from the ashes of their previous bands with a scrappy but exuberant self-titled LP that ran through an an astonishingly 17 tracks in 27 minutes. But back in 2010 the album - and the band - seemed to get lost amongst a slew of other groups who were making similar endearingly melody rich DIY post-punk; gaining a small but ardent following in the process.

In no apparent rush to follow-up that album, the trio of Rachel Aggs, Ros Murray and Rachel Horwood have waited four years to finally return with a record that sees them flaunting - as the album’s title suggests - renewed belief in their abilities; presenting something that supersedes their self-titled debut but keeps most of the traits that made it engaging.

Confidence clocks in at around half an hour, but takes it at a slightly more luxurious pace. The album’s 11 songs begin with ‘Beach Babe’, a glorious track that shakes and rattles with taut militaristic drumming and loose baselines. It's the start of a strong run that continues into ‘Medicine’ and ‘Big Feeling’ – the former propelled forward by a muscular rhythms that fuse tight harmonies to the haunting rumble of brass section; the latter with a recurring err… echo of Martha and The Muffins ‘Echo Beach’, guitars undulating over metronomic percussion as Aggs' vocals resonate with fervent immediacy. “When you’re young, you’ve got time on your side”, she yelps, in a call to the youth to hold tight and harness their powers in time, “Don’t give up” she advises as the song draws to a close.

‘Leaves’, the album’s midpoint, brings everything from the preceding five tracks together into a recursive, afrobeat-inspired delight. “I feel so much I just can’t explain” sing the trio in unison as the song builds in pace, the jangle of their guitars eventually spilling out into ‘Boredom’ and ‘Cinema’. These mark a turning point in the record which sends them headlong into scrappier territory. The thrash and fire of ‘punk’ emerging from behind the ‘post’, in a squall of spiralling crescendos and vicious lyrical accusations, a thick undercurrent of apprehension and unease amidst these sparkling melodies.

“I had a dream, I lost my teeth wails Aggs on ‘Teeth’ a storm of ferocious rhythm surrounds her words. The confidence might come, but it’s at the price of self doubt. “What’s the point in talking if no one is listening” she spits on album closer ‘Shyness’ over the squawk of throttled sax, before descending into a remarkably buoyant melody that closes out the album on a sweet note. A kiss on the cheek to wash the vitriol and anxiety away.

What’s most impressive about Confidence is that it feels like a genuine leap forward for Trash Kit, despite the lack of innovation. They are still indebted to the past and rattling off post-punk tropes by the (near) dozen, but there is something startlingly focused about what they’re doing here. And it makes this second effort a tarnished little gem amongst the late 2014 releases.