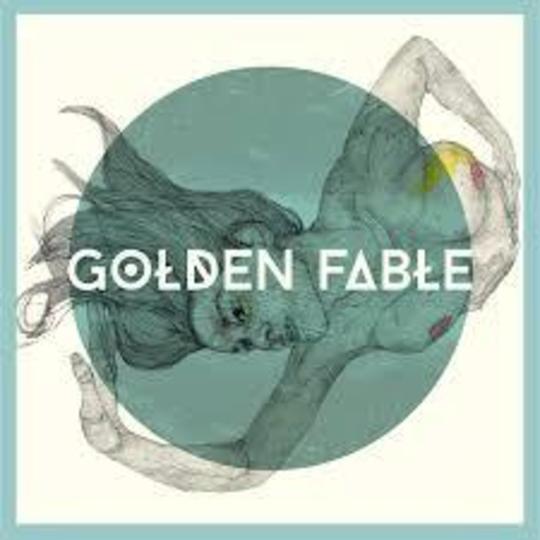 Hailing from the rugged, windswept foothills of Snowdonia, Golden Fable are a band whose sound is certainly shaped by their environment. Grandiose electronic and instrumental backdrops are what new record Ancient Blue is all about, sounding more than a little bit reminiscent of the North Welsh countryside. Rebecca Palin’s ethereal vocals have something of a Celtic aesthetic about them, adding to the overall feeling that this is an album very much of a particular place and time.

For all its expansiveness and bold flourishes, however, Ancient Blue is definitely missing something. The LP’s broad, horizon-gazing sound is thanks to the production of David Wrench (Bat for Lashes, Caribou) and Jimmy Robertson (Anna Calvi), yet the two have polished the final to product to within an inch of its life, leaving the record without the rustic aesthetic that it feels like it should have. Each constituent part feels shiny, gleaming with pride at its ability to fit comfortably onto the playlists of daytime Radio 2.

However, it is hard to deny that the individual elements are impressive. Palin’s vocal in particular has been allowed to soar, dominating each track and cutting through every layer of instrumentation. Wrench seems to have brought certain aspects of his work with Natasha Khan with him, making the vocals sound somewhat otherworldly and esoteric. Yet, there is an overriding feeling that they don’t quite fit in to this rock context. Palin’s voice is so distinctive and original that it demands a very specific genre setting, and you can’t help but feel that something a little more classically styled would suit it better.

Instrumentally, Ancient Blue is a relatively eclectic affair. The standard guitar/bass/drums set up forms the backbone of most tracks, but it’s the added extras that serve to add interest. ‘Breathe In’ has a string quartet lurking in the shadows of the electric guitars, while ‘Under Your Wing’ has growling, brooding synths that James Blake would be proud to call his own. Yet while these different components do make such a highly polished sound a little less sterile, they also fail to always work. The Blake-style synths work best in minimalist surroundings, not the maximalist stylings that are proposed by both the vocals and instrumentation here.

And when Golden Fable aren’t trying to experiment, the result is often decidedly generic. They have taken detailed notes from the easy-listening rock rulebook, a fact not helped by a squeaky clean production that makes each track sound like every big commercial rock act to grace the airwaves. There’s some Snow Patrol in there, Coldplay, maybe even a little Kings of Leon, but unfortunately never possessing the same immediacy or charm that made these titans so successful.

Golden Fable are a band who are clearly aiming high, the only problem is that they are trying to sound like they are already there. The bands that they appear to imitate get where they are because of the excitement and originality of their earlier work, and by trying to skip this vital phase the Welsh trio are in danger of scuppering any possible rise to the stardom that they so clearly dream of.