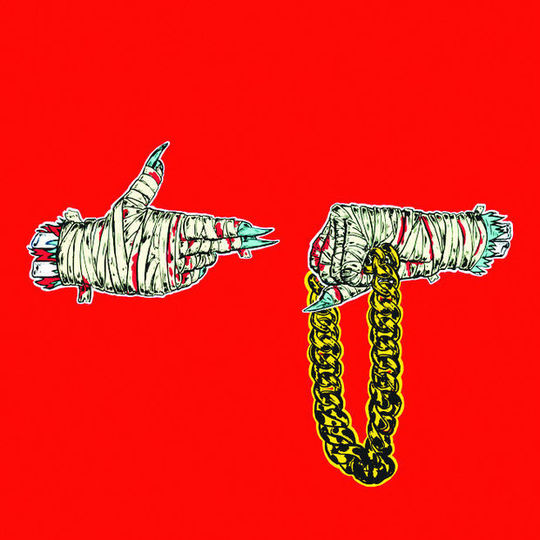 “You know your favourite rapper ain’t shit, and me I might be.”

That one line, from ‘Jeopardy’, sums up pretty neatly what it is about Run the Jewels that has come to capture the imagination of not only the hip-hop community, but the wider world of alternative music, too. It’s hardly the most arresting lyric on the record, but it at once both encapsulates one of the great hallmarks of the genre - aggressive competitiveness - and calls out how stale it’s become, too. We’ve had plenty of false dawns on the hip-hop front over the past decade or so - take Lil Wayne’s descent into self-parody, Odd Future being consumed by their own painfully-exaggerated stage personas and the apparently never-ending slews of promising rappers being swallowed up by over-production on their debuts after mixtapes rightly generated hype - Kid Cudi and J Cole both spring to mind. When Killer Mike makes that proclamation in opening Run the Jewels 2, though, it carries so much more weight that in ought to - for no other reason than that you can’t help but believe him.

There’s something a little strange about writing this review, to a degree, seeing as one of the primary purposes of music criticism is to allow readers to form their own opinions before buying; RTJ2, though, is available free of charge to anybody who wants it. The only problematic thing about that is that there might be the subconscious assumption that it effectively amounts to a mixtape, which couldn’t be further from the truth - you can go out and buy a physical copy of RTJ2, released by a proper record label, but that’s only the superficial proof that this is an actual album; the substantial evidence is available in abundance on the record itself.

Cohesion is the name of the game here; El-P has made a career out of taking an attitude to record production that champions sheer volume as king and has about as much regard for subtlety as a pneumatic drill. In the earlier stages of his career, that was a go-to point of contention for his critics, but he’s now entered a rich vein of form, starting with his solo LP Cancer for Cure back in 2012, that vindicates his admirably unyielding approach in spectacular fashion; he’s forced the critics to live with him, rather than the other way around. On RTJ2, it feels as if he’s thrown together a selection of relatively standard-issue beats and then methodically gone over them to figure out how he can make them noisier, more belligerent and, thus, more befitting the Run the Jewels MO. He teams the percussion with low, menacing synth and squeals of guitar on ‘All My Life’, whilst the distorted, bassy squelch on ‘Blockbuster Night Pt. 1’ helps it to lead the current chase for the track that’s likely to prove the most oppressively loud on stage. There’s experimentation, too; Travis Barker’s turn on ‘All Due Respect’ brings an entirely different dimension to proceedings.

Not that there’s going to be any lighters-in-the-air moments, mind; RTJ2 is relentless in its confrontational nature from start to finish. The sheer ferocity of the pair’s appetite for self-aggrandisement is well-established, at this point, but they find plenty of time, too - despite the record’s pretty swift 39-minute runtime - to disparage pretty much everybody they can think of. It’s this that sets Run the Jewels apart from so many of their contemporaries, and that explains quite why they genuinely look as if they’re changing the game; in a genre so often mired in materialism, Run the Jewels seem as if they’re sustained not by their lifestyles, their image or even their fanbase, but by their constant need to fire potshots at the disingenuous and the dishonest; when they talk about ‘haters’, you get the impression that they’re taking aim at everybody from posers to governments, and it’s the broad nature of these targets that makes the future for Run the Jewels seem like a place of infinite possibility. Of course, it helps that both are uncommonly gifted wordsmiths, too, and that their individual flows complement each other so sharply; El-P’s consistently crisp delivery comes in stark contrast to Mike’s often slurred lines.

All the evidence points to Run the Jewels being the first genuine shot in the arm that hip hop has had in years - and that’s despite the fact that they’re not trying to reinvent the wheel. Instead, you can probably ascribe their success to two things; one, that they have the intelligence to constantly play to their strengths - RTJ2 is replete with razor-sharp lyricism and clattering, abrasive production - and two, that they don’t hide behind anything. They stand for something, even if they’re often deliberately vague about quite what that is; RTJ2 has sealed their position as the hip hop’s most exciting duo, and that’s partly because you get the feeling that they still, somehow, have another gear to go up yet.