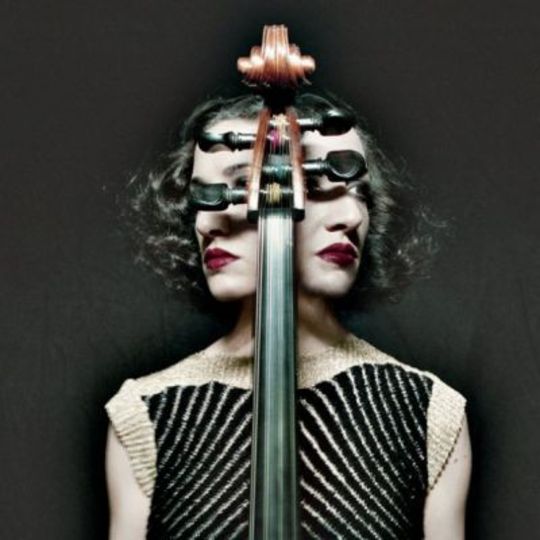 Acrobats the debut album from singer-songwriter with an added twist Laura Moody, is a quirky surprise and delight. Cellist in the highly rated Elysian Quartet, as well as gun for hire for virtually any decent band you can name, ranging from Aphex Twin, all the way through to Lau, by way of Frank Turner, Hot Chip, Imogen Heap and even, whisper it, Tim Minchin, Moody debuts under her own auspices here with this Kickstarter-funded offering.

As albums in the contemporary age seem to become ever shorter – perhaps to mitigate for the shortened attention spans of the modern listener – Acrobats weighs in at a mere seven tracks. This fact becomes all the more disappointing as the sheer dizzying wonder of those seven tracks unfolds. Laura Moody is no ordinary performer. Utilising the cello as her sole accompaniment, Moody creates layer upon layer of atmosphere as all manner of tones and rhythmic flourishes are coaxed from her instrument. Production duo Edward Jenner and Dominic Murcott have unquestionably succeed in aiding Moody in maximising the scope of a sound and project like this. Whereas opener 'We Are Waiting', with its “I am my beloved’s and he is mine refrain, is built on a satisfying pizzicato riff, 'Turn Away’ is carried along on a bed of rhythmic loops containing both vocal moans and a stop-start series of ever-more dizzying flourishes of instrumental prowess, as Moody begins to really get into her stride. It is instructive that two instruments, one stringed and yet unconventional, and one vocal, can make such a diverse series of sounds. Changes in tone and dynamics are ever near as the drama peaks and falls. It must certainly be an arresting live proposition to experience these seven songs.

And so it goes on. 'Momento' exhibits perhaps more conventional, but no less exhilarating legato passages of accompaniment which propel an emotional rollercoaster of a song. The closest comparisons musically to this kind of wonder would perhaps be Timbre, or at a very tenuous push, some of the live portions of Damien Rice’s Vivienne Long-fuelled output, but really as each song builds upon the last, it becomes ever more obvious that Laura Moody is an artist in a field all of her own. An artist in the true sense of the word, her mastery over both the cello and her voice make her one of 2014’s most exciting debut makers.

All of this would be for virtually nought, were it not for the fact that, far from being merely interesting, these songs are actually great too. Hooks, and honest-to-God choruses abound. You’ll be grooving along to the second minute of “Call This Time Love” almost in spite of yourself, almost forgetting that all of the elements you can hear are made from a voice and a cello. If Thom Yorke did something like this we’d all be proclaiming his genius.

Moody’s vocal is a power all of its own too. Ranging from whispered, close to the mic intimacy one minute all the way to full-throated howl the next, it takes in elements of Celtic folk, without ever resorting to caricature.

By the time an emotional cover of the Nick Drake classic 'Cello Song' closes this splendid set, this listener, at least, is wrung out, all too aware of having experienced something almost transcendent. It'd be sad if the somewhat niche nature of the genre at hand might put off less adventurous listeners. This is a really great and interesting, in the best sense of the word, debut album. It contains a sense of musical adventure and creativity which has been lacking all too often in a somewhat moribund musical year.

So how about that then, a seven-song album of cello and vocal driven folk pop songs turns out to be amazing. Who’d have thought it?