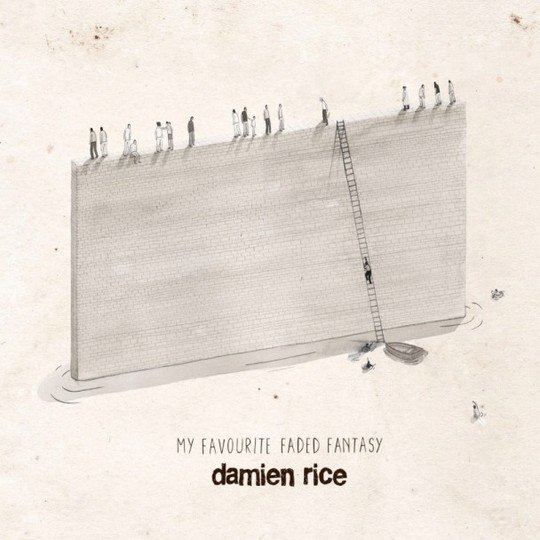 "It takes a lot to know a man", admits/warns Damien Rice as he allows his troubles to stretch grandly before him. A wonder they do not consume him as they twist across spiky terrain that offers no place to hide. The trials and tribulations of the worldweary troubadour are nothing new, but in Rice's rather elusive case, there's much to address after many years in the wilderness.

Rumours of disappearance and reports of dishevelment have swirled since he quietly faded into the background not long after 2006's 9 came and went. Talk of cults and sightings in far-flung rustic locales joined the conversation, the music falling to one side. The book threatened to close on Rice, cementing an Achilles figure who peaked too soon.

To know him, to attempt to tap into his bruised frequencies, requires a healthy amount of emotional scarring on the part of those willing to listen. Heartbreak suffered and, importantly, inflicted upon another. It's tempting to read much of My Favourite Faded Fantasy as a perhaps-destined-to-be-unanswered letter to ex-bandmate and girlfriend Lisa Hannigan, the Great Lost that continues to haunt Rice. Her voice, a delicate yet dangerous thing, wove deep through his previous fabric. That thread is absent here but so much of Hannigan remains. The very idea of her is present in every second. The need for atonement. That intoxicating feeling, as Rice puts it on his title track, of "what it all could be…". He draws power from that line and many others. The soul is laid bare, the frailties and flaws violently exposed.

Self-preservation emerges. Odd, given just how willing Rice is to turn his knives inward. His implements are dressed up in heaven-sent strings and searching melodies but they cut no less deep. 'My Favourite Faded Fantasy' paints the object of his desires as "my poison, my cross, my razor blade". It eventually rises only to crash down as our leading man furiously confesses. Speaking of fury, 'The Greatest Bastard' is the kind of song that Ed Sheeran - who credits Rice as a key inspiration - may well indeed write some day. Presently, he lacks the unflinching commitment to self-sabotage that Rice possesses in abundance and the nuance required to make it sing. Everything sings here, no matter how dark the matter at hand. At five minutes and five seconds, 'The Greatest Bastard' is the shortest of these eight songs, but it flows like a novella.

'I Don't Want To Change You', though only a scattering of seconds longer, is a tome unto itself. One is wary of projecting too much here, but, though a sincere 'I fucked up, I'm sorry, I love you' sentiment is to the fore, a deep sense of self-actualisation and the acceptance of our own failings comes to light. Even the title betrays a certain selfishness, hinting at a sliver of control. Old ghosts are always capable of bringing new regrets but the battle is there to be fought and Rice claims his own ground quite splendidly. On the surface, things are so matter-of-fact and warmly inviting that Alexis Petridis is spot-on when he notes in his tricky Guardian chat with Rice that the song is a perfect fit for a mawkish X Factor 'interpretation'. You'd hope such an exceptional statement won't be sullied by the circus.

My Favourite Faded Fantasy is quite the production. 'It Takes A Lot To Know A Man' - unveiled early - is essentially an entire album's worth of narrative and themes distilled into a two-act play. Rice goes big on his words for the first half - the centrepiece of which finds several voices fighting to be heard in a brilliant collision - before rain washes him away so that a stark piano and screaming strings may eventually entwine. The presence of Rick Rubin brings the expected studio nous but Rice meets him in earnest, his arrangements often bewitching and sometimes extraordinary.

Not always, you understand. Such vulnerable marching almost begs for a stumble, and while the slightly too surface 'Colour Me In' is no great pratfall, it's the kind of capricious effort that would have soared on O but only makes a slighter impression here. That's fine. A touch of imperfection is necessary. Rice is just as determined on what feels like a very definite 'Side B', but the blows are aimed outward now. His prison found within 'The Box' requires scorn and aggression to escape. Somehow, grace is retained. As the Fantasy begins to fade, so too the light must dim. The final missives act as end credits and coda, respectively. One aims for majesty, one for solemnity. Both pierce through. There's a lot of noise on this return. Just so. As the saying goes; all of man's troubles come from his inability to sit quietly in a room by himself. Damien Rice has done that for long enough.