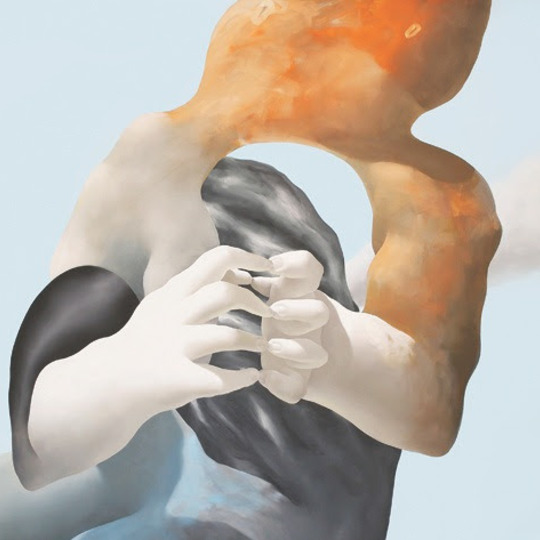 In his video for recent single 'Two Hearts', Deptford Goth stands at the edge of a beach on the cusp of a sunset. Shots of emerging, lazy waves flicker upon the screen as he stares to the floor, immersed in thought and seemingly subconsciously uttering the lyrics. "Some of the parts of who we are, A life greater than what we do, But it's never going to come straight to you, And it's never going to leave you alone" he says, before layers of whispering vocals summon claps, surging piano chords and echoing strums.

Written towards the end of last year and moving into January, Songs has a sense of new beginnings, of hope and of a new outlook on life. Pushing his vocals to the forefront of the production, it's clear that Daniel Woolhouse has found confidence in his own craft, with the lyrics far more prominent compared to Life After Defo's flittering electronica disguise. "Here is a place where we can grow ourselves, my love," he utters on 'Do Exist' before speaking of the "loud city voices", reflecting upon his move from London to the seaside. Engrossing himself in nature has clearly been a good decision for the singer-songwriter, building the watery environments into his songs with the obvious 'Near to a River' as well as odes to the sea and its unfathomable and beguiling presence.


As with Life After Defo, there's plenty of percussive aspects, teamed with synth chords and building layers of vocal quirks. This works best on 'A Circle,' which sees Woolhouse starting things off with an a capella vocal before working his way to a euphoric haze that produces a clever blend of R&B and electronica. Single 'Two Hearts' is the catchiest of all the songs, showcasing Woolhouse's sunnier side and creating an almost sing-a-long aspect that we've not seen since the brilliant 'Union'. The catchy hooks continue on final track 'A Shelter, A Weapon,' that proves his talent as a structural songwriter, effortlessly constructing the percussive architecture around simple yet effective words.

Whilst it's easy to try and pinpoint Deptford Goth as another James Blake / The XX / How to Dress Well post-whatever type artist, Woolhouse manages to craft out a genre that doesn't necessarily conform to the usual ambient R&B. Yes, there's aspects of electronica in his use of synths and building rhythms and his voice does compliment the R&B slow-jam style but he does it with a sense of vulnerability that sets him apart. It's the kind of vulnerability that you'd associate with the likes of Sparklehorse or Elliott Smith, where the lyrics may not be as metaphorical as his predecessors but it still gets you right in the chest.

The only problem with Songs is that the lyrics might often prove too obvious; whilst Woolhouse's newfound assurance in his vocal ability is more than a welcome attribute, cheesy phrases such as "Love is enough" and "the rhythm of life is an irregular beat" leaves this record in the shadow of Life After Defo in terms of lyrical originality. As with many other musicians, falling in love can often be the downfall of listener connectivity – we want to be reminded of our infinite loneliness in this world and that there's someone out there that feels '*just like us'.

Nevertheless, Songs is an accomplished second album, that sees Woolhouse building on the foundations of electronica-tinged outputs that you'll quite easily appreciate and enjoy. Best enjoyed on a solitary journey home on the bus or train, just as the sun is setting, Songs may not stop you in your tracks but it'll provide a beautiful soundtrack for the journey.