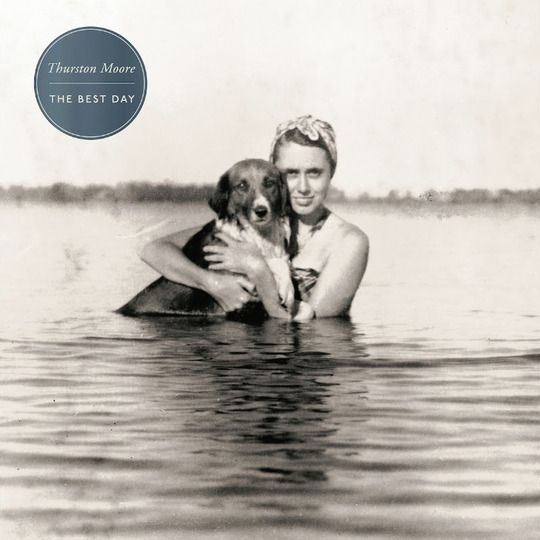 Try as you might, you won’t find much in the way of pained post-divorce angst in Thurston Moore’s latest solo album, though that hasn’t stopped people obsessively looking for it. Moore, having swapped New York’s grimy sidewalks for the artisan-coffee-and-craft-ale paradise of Stoke Newington in north London (essentially swapping the Big Apple for the Organic Pear), and having got his art-rock noise out the way on last year's Chelsea Light Moving album, has returned to business as usual for The Best Day, only his fourth full solo record in a 30+ year career.

Much DNA is shared with the more grown-up, muso-y, shoegazy end of Sonic Youth’s output, to the point long-time collaborator Steve Shelley has been flown in especially to thump the tubs behind it all. He’s completed the line-up with shoegaze royalty as well: there’s My Bloody Valentine’s Debbie Googe screwing in her over-used ear plugs to perform bass duties, while weirdo-British-alt-rock legend James Sedward is sparring with Moore on guitar. The quartet are clearly having a ball playing together too – you can tell because most of the songs go on for about a million years.

It’s not just the length that’s the giveaway though. The Best Day is a shiny record, with an exuberant freshness across the whole thing; it practically sparkles. It comes off as understated, unshowy stuff that revels in establishing satisfying grooves and running with them and it feels extremely comfortable: a bunch of exceptionally talented musicians breezing through some deceptively complex rock shapes and making it sound easy. The title track is simultaneously the closest thing to pop here, with its wicked-cool rock-dinosaur solo and proper chorus and also, with its Seventies 12-string acoustic pull-offs, the proggiest moment on the record. ‘Detonation’ is a stompbox-sound away from a vintage Sonic Youth song in all but name with guitars jangling in happy dischord against each other, while ‘Grace Lake’ is a drone-pop instrumental, a weirdly tuned guitar stuck in each speaker, a solo that’s 94 percent feedback and a groove that weaves in and out of the rhythms like a snake on a croquet field. There’s something really buoyant about it – luxuriating in the noise these four mainstay rock instruments can make together.

Best of all is the opening trio of ‘Speak to the Wild’, a flowing, mesmeric mid-pacer that owes a debt as much Led Zep as Thurston-favourites the Velvet Underground, ‘Furthermore’ a jammy 11-minutes of post-psyche melancholy, and ‘Tape’, a typical Mooreian loveletter to mixtapes (”press pause, record, play, all at once”) over 12-string acoustic guitar that calls to mind Neil Young and John Cale at their artsy-ist.

“Here’s a man that has done it all” sings Moore on ‘The Best Day’ and he may or may not be singing about himself but the sentiment rings true all the same. Thurston Moore established the template for arty alt-rock and he knows where his strengths are. This isn’t the sound of him stretching himself, or pushing boundaries – it’s the sound of him comfortably in his sweet spot, and that’s no bad thing.