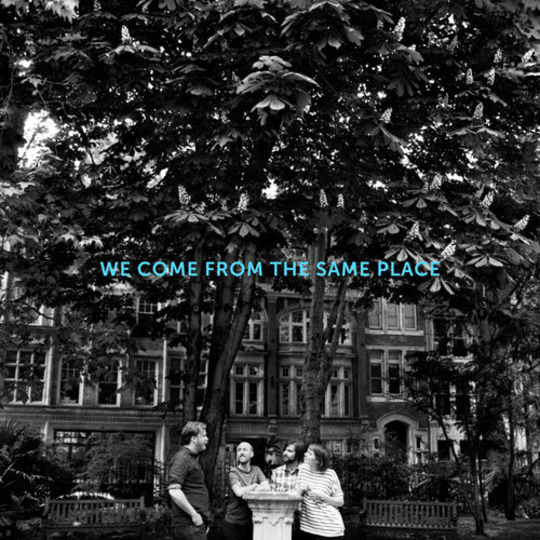 Allo Darlin’ have become the most compelling and promising band to emerge from the be-sweatered ghetto of the indiepop scene in recent years. Outstanding acts like The Understudies and Withered Hand have found comfortable homes within the genre, yet it was the Anglo-Australian four piece that seemed primed to break the barriers first with 2012’s lachrymose, tender Europe and its frankly stunning summer anthem single ‘Capricornia’.

Whilst it sold well and garnered tremendous critical acclaim the band are very much on a promise with We Come from the Same Place which, we demand, goes bigger, brighter, faster, more heart-tuggingly delicious.

In fact, WCFTSP is, if not a stylistic sprint away from Europe, then at least represents a shift in tone. Elizabeth Morris’ beguiling, whisper-in-your-ear vocals are still the melting heart of the band and her lyrics still the hook on which the songs are carefully pinned – this time though there is, musically, less bluster, thematically at least a good dose less sentimentality.

Morris it seems, has decided to move forward and in doing so allows us a set of songs in which that very process – of separating oneself from the long shadow cast by lamps of the past in order to relish the present and possibilities of the future – is endearingly, often brilliantly described.

Morris’ knack of turning on a dime from specific description, packed with evocative imagery to heartfelt, all-encompassing romance and elation is found first on the mid-paced Go-Betweens throb of ‘Kings and Queens’ as she proffers “In a dusty town of student bars you sang your heart out to the drunken crowd” before shifting to “They can call us what they want but we know that we are the kings and queens of love”. It’s a neat trick and one that serves the band’s eternal underdog appeal.

‘Crickets in the Rain’, a delightful celebration of the finest aspects of love but also of the most confusing and tangled is the album in microcosm, beginning with nostalgia (“Back in 1992…I kissed you in a swimming pool”) but then catching us outside our comfort zone (“Nothing feels the way it did before / And I am grateful for that”) then hammering it all home over a particularly resonant bassline from Bill Botting (“I have a sense that this will end / But I am going forward”).

Perhaps more impressive is the glowing ‘History Lessons’ in which a bruise-hued bassline rides Morris’ ukelele wave to the aquarium where Morris notes of her companion “You’re studying history / To know where you’re coming from” and summarises with the painful yet optimistic “What came before doesn’t have to have been the best.” It’s weighted with the kind of bulbous tears that come with departure and new beginnings alike, and it is wonderful.

Although the band rarely stray from their established sound it’s worth noting that Paul Rains conjures some pretty striking guitar lines along the way – his clarity and chiming precision on opener ‘Heartbeat’ and his countrified work on ‘Another Year’ (which serves as a little cousin to ‘Europe’s ‘Tallulah’ for those with an interest in such things) are both understated and quietly impressive, while drummer Michael Collins keeps it relatively sparse and simple apart from when required to shift up a gear on the Twin Peaks referencing popper ‘Half Heart Necklace’ and the stop-start intricacy of the aforementioned ‘Heartbeat’.

There are a couple of mis-steps here – the closing duet between Morris and guitarist Rains grates even as it attempts to endear – their voices feeling mismatched and despite the song’s tremendous sense of fun it’s an awkward closer. There are also times when Morris’ detailing of a scene can result in a wince – her description of drinking wine and dancing in her stockings on the otherwise pleasing Style Council roll of ‘Angela’ is perhaps the worst culprit. They always pull it back though – that very same song boasting the barefaced brilliance of “The hardest thing we have to learn / Is when those we love don’t love us in return”.

While the excellent minor key pop of ‘Romance and Adventure’, with its near a capella chorus, little nods to ‘Dancin’ in the Dark’ in the guitar part and Moz-like, lipsmacking delivery make it the most vital, exciting thing here, it’s down to ‘Santa Maria Novella’ to offer the defining line of the album as we stroll through the gardens of the famed Florence church. “Bitterness has no place here” trills Morris and we can be fairly sure that that’s true.

While they may never lose their tendency to peek over their shoulders and tell of the heart-filling past once in a while, and nor should they, it seems that Allo Darlin’ have decided that a step forward can bring a greater, more tangible joy, and for that, they should surely be celebrated.