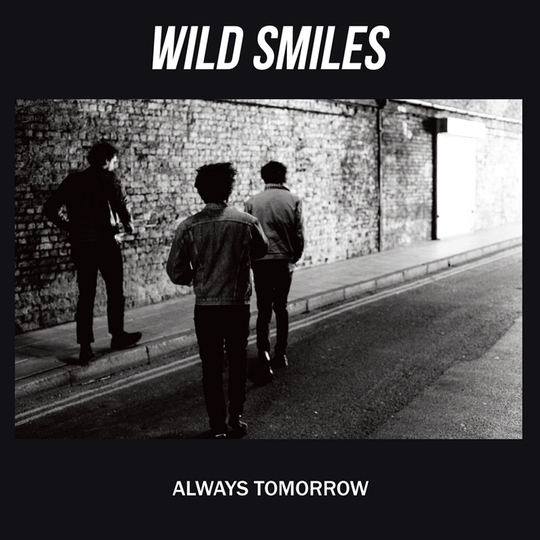 The spirit of '89 is alive and well. If in doubt, just ask Winchester's Wild Smiles. Following on from Cheatahs' excellent debut, this trio evoke similar references throughout Always Tomorrow, their first album and also first release for Sunday Best.

Initially picked up by Geoff Barrow's Invada label at the start of last year, the band's inaugural release, double a-side seven-inch 'Sweet Sixteen'/'Tangled Hair' fused melodic surf pop with the heavier elements of grunge. Doused in electrifying reverb and feedback, comparisons with the likes of Dinosaur Jr, No Age and My Bloody Valentine proved inevitable, albeit flattering. And while they're not averse to wearing their influences proudly in stencilled, bold lettering, there's something deeply invigorating about the way they execute their take on what's become a well worn starting point for many artists of the modern day.

Their lyrical inspiration holds no bounds either. Whether it be nihilistic thoughts brought on by boredom, the tawdry nature of relationships or personal tragedies, Wild Smiles won't be found singing throwaway paeans to slumming around on the beach like some of their peers. One could argue we've been here before; Nine Black Alps being the last British band in recent years to find themselves on the cusp of mainstream success with a sound indebted to the guttural wastelands of Seattle, Brooklyn and Dublin respectively. Except in their case Joe Public and the commercially astute powers that be thought otherwise.

So what makes Wild Smiles any different? On the surface, not a great deal. Yet for the most part, Always Tomorrow feels like a celebration of sorts, despite it's subject matter. While the title track declares, "No matter what I do nothing changes" as its bold statement of intent, the short sharp shock of brothers Chris and Joe Peden's effects pedal-fuelled buzzsaw guitars echo The Ramones through the eyes of J Mascis. Likewise 'Figure It Out' follows a similar lineage, this time channeled via Surfer Rosa's slack blasé as the spectres of Joey and his bruvvas linger in the background.

However, it's not all just two chords and three minutes. 'Everyone's the Same' echoes the sentiments and structure (in the verse at any rate) of The Jesus & Mary Chain's 'Just Like Honey'. "I never want to let you go," sings Chris Peden, his voice tinged with sadness. Meanwhile, 'Hold On' might sound like a long lost Beach Boys outtake at first, but beneath its sparkly veneer lies the poignant story of a close friend who took his own life.

'I'm Gone' and 'Never Wanted This' both deal with the resignation of living in these times of austerity. The former's three-minute surge insisting "No I don't have a job" before the latter incredulously mocks those that do ("I can wear a tie, I could wear a suit, a monkey in a suit to make some money"). While not exactly in the same vein as 'Maggie's Farm' or 'Rat Race' from a lyrical perspective, the social indignity felt by today's adolescents and twenty-somethings looms large in its dissonant rage.

Elsewhere, 'Girlfriend' could be viewed as either a complimentary twist ("My girlfriend likes to talk!") or an obtuse character assassination of one's other half ("I was looking for a place to hide") depending which side of the fence one sits. Fizzy midpoint 'The Gun' could be Nirvana covering REM in a parallel universe, while 'The Best Four Years' marries Pavement to My Bloody Valentine's 'Strawberry Wine' era with magical results.

Sure, there'll no doubt be doubts raised as to whether Wild Smiles can sustain longevity without cementing their own identity but if it's half an hour's worth of guitar-crafted pop thrills you're after, they don't come much better than this.