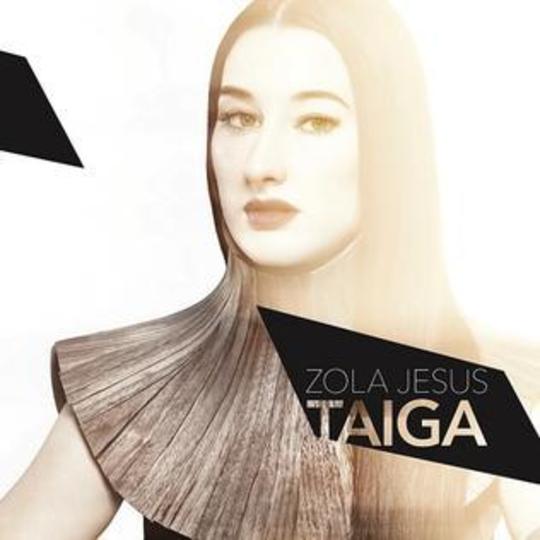 'Accessible pop music' isn’t the first phrase that comes to mind when one mentions Zola Jesus. Pop influences have always been apparent but rarely at the forefront of her work, with Nika Danilova instead preferring to swathe herself in layers of gothic ambience and industrial electronica. Whilst this aesthetic is still present and leaves the listener in no doubt as to the fact that Taiga is still very much a Zola Jesus record, it is also apparent that she has undergone a huge stylistic change. This is an album that is characterised by its size, a numbing abundance of big beats, huge brass sections and soaring vocals.

The opening title track greets you with ominous, haunting synths and a spine-tingling vocal line which, in true Zola Jesus style, are shrouded in darkness. These soon give way to a more industrial, hard hitting drum beat and epic brass section which leave the listener wanting more. Track two is entitled 'Dangerous Days' and is the album’s lead single and a definite highlight. This is where the pop focus really becomes apparent, with a steady four on the floor beat and incredibly catchy chorus which bathes the listener in warmth. One might even draw comparisons with Swedish pixie Robyn, though it undoubtedly possesses a foreboding which is characteristically Zola Jesus.

‘Dust’ is initially a much more reserved affair, dominated by a steady swinging rhythm which ambles along pleasantly. Towards the end of the track the tempo changes particularly abruptly and the ensuing cacophony of drums and vocals are particularly jarring, ruining what is an otherwise decent track. Track four, entitled ‘Hunger’ is another that sounds remarkably like a Scandi pop tune. This song has a huge, almost tribal sounding, percussion section which carry Nika’s otherwise angelic vocals effortlessly for the duration of the track. Once again the only real let down is a questionable middle eight which doesn’t appear to serve any real purpose.

‘Ego’ is a welcome break in the album with a glorious sounding string section that strongly compliments Nika’s awesome vocal ability. The complicated, overproduced rhythm sections have been ditched for this track and it works strongly in her favour. The album’s second half continues in much the same fashion as the first, with nothing particularly breaking the mould or jumping out. And by this point it is most certainly beginning to become tiring.

The final two tracks unexpectedly conduct themselves with a restraint that was not present in the first half of the record, and as such are refreshingly well executed. Sadly, however, this isn’t quite enough to make up for the earlier overproduction, and though Taiga ends on something of a high, in all it comes across as a wholly wasted opportunity that, with a few lessons in moderation and restraint, could have been something altogether more impressive.