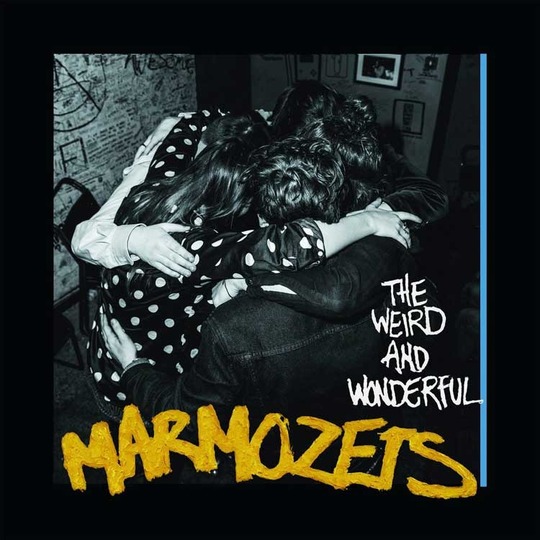 Reviewing the debut albums by buzz bands can be awkward. Maybe the band of the moment will deliver on the early tidal wave of hyperbole and optimism. But in the more cynical amongst us (and I feel that Drowned in Sound contains a fair number of cynics) the hope that the band will simply crash and burn. Perhaps there’ll be a humorous review full of wit and knowing sarcasm. Perhaps the number at the bottom will be a big fat '0' and we can all return to listening to stuff no-one’s heard of, whilst secretly really enjoying the new Taylor Swift single or.

I’ll confess that as I came to The Weird and Wonderful Marmozets, the debut album from (wait for it) Marmozets, I both wanted to love and hate the record. I wanted to say that they were a pop band trying to be metal, or a metal band with bubblegum pop choruses, or the kind of metal your mum would like, but here’s the real kicker….

Marmozets are a fully-formed, one-of-a-kind, grown-up rock band. Following the recent trail laid by Royal Blood and Lonely the Brave this band of brothers (and sister) have made an album which is both crushing and soulful, technical yet approachable, skyscraping yet intimate. It is a really good record. It is almost annoyingly good. From the moment ‘Born Young and Free’ erupts from the speakers, any pretence that this isn’t going to be fun is absolutely destroyed. This is a teenage anthem in the making, with attitude allied to an almost biblical exhortation to “shake the dust from your feet”, the combination of Becca MacIntyre’s vocal, one moment lilting and melodious, the next guttural and venomous. The guitar interplay of Josh MacIntyre and Sam Bottomley is to the fore, whilst the intricacies of the rhythmic work from a further MacIntyre and a further Bottomley point to the fact that something special is about to unfold.

By the time we reach recent single ‘Captivate You’, the deal is sealed, as Becca’s vocals, soaring and plaintive, carry along the metal-punk version of a lighter-waving anthem. This is the kind of song to get whole fields dancing, headbanging and singing at the same time (is this possible? I’d like to see it).

Throughout, production by Larry Hibbitt, of erstwhile indie heroes Hundred Reasons, is exemplary, delicately balancing the intricate math-rock of some of Marmozet’s less conventional leanings with enough radio friendly bombast to make certain that the band will continue to be shoo-ins for Radio 1 daytime love (no bad thing, that). Middle trio ‘Particle’, ‘Cry’ and ‘Weird and Wonderful’ show off the talents of both band and producer in all their diverse glory, particularly ‘Cry’ which builds slowly to an epic climax as Becca continues to sound like an even more passionate Skin (showing my age there).

‘Vibetech,’ probably the most technical and challenging tune here, serves merely to emphasise all the more the breadth and depth of the compositional talent on show. It twists and turns, spits and rears. It is wonderful.

By the time closing duo ‘Move Shake Hide’ and ‘Back to You’ slide into view, ears and heart have been pummelled and probed into submission. ‘Back to You’ is a stunning closer, as the band reach heights of beauty often only dreamt of in a punk rock release. As a sense of healing rolls from the speakers it is only possible to conclude that this young band have crafted one of the finest rock debuts you could hope for. Sure, they’re hyped. Sure, a lot of this has been done before, but not often with this level of assurance and class on a debut album. Not often from such a young band. Not often in such a way as to leave listeners gasping for more, and hoping against hope that the huge potential realised here can only be extended into a long and ever more fruitful career If this is the kind of pop music we’re going to be stuck with for the next few months I’m all for it. For British rock there is hope, there is life. It is Marmozets.