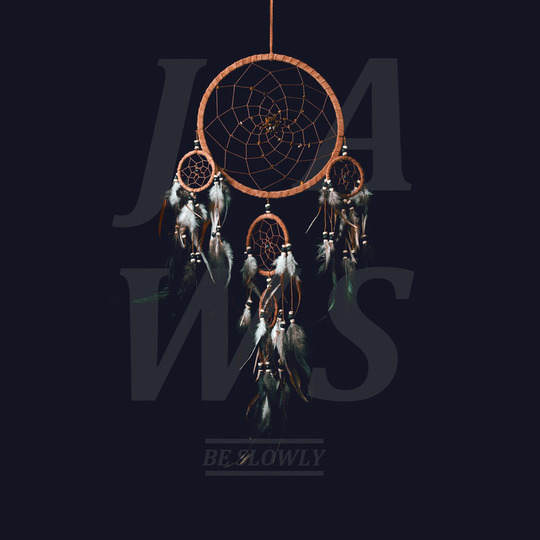 If there’s one central piece of evidence that NME no longer has the cultural influence that it once did, it’s the fact that the whole 'B-Town' thing never took hold in the public consciousness after being much trumpeted in late 2012 to early 2013. Aside from the factual inaccuracy of the name (even a geographically illiterate Belfastian like myself knows that Birmingham is a city, not a town), the bands who became associated with the scene seem to have had attention placed on them far too early in their development, hence the decidedly mixed reviews that two of the major bands associated with it, Swim Deep and Peace, received for their debut, major label albums.

Perhaps it is for this reason that JAWS, the third band to be deemed torchbearers of the scene, have waited for more than a year before unleashing their first album, the aptly titled Be Slowly, on us. Like Swim Deep and Peace before them, the Eighties/Nineties indie revivalist sound is their domain, albeit with a slightly darker twist.

In fact, for half the album, the band wear their influences firmly on their sleeves. It’s as if JAWS had decided that the concept behind the album was to sound like The Stone Roses, only gloomier (about 17 Seconds gloomier, to be precise). Hence, we get alright tracks like ‘Time’ and ‘Sunset State’, with washed-out guitars and vocals that could be easily confused by the uninitiated with Ian Brown’s. That’s not to say that this combination doesn’t deliver the goods. The strongest track on the album, the spectacular ‘Gold’, is like maudlin love-child of ‘I Wanna Be Adored’ and ‘Echo Beach’, complete with two killer guitar riffs, whilst ‘Filth’ builds up into a glorious cacophony of noise by its end.

Outside of these tracks, some the more notable songs include ‘Think Too Much, Feel Too Little’, the poppiest song, and one that owes more than a tip of the hat to The 1975, and the album’s title track, which racks somewhere in the middle echelons of sonic knock-offs of The Cure. However, special mention must go to ‘Surround You’, a song where the band seemingly stop trying to mine their influences in order to make something that sounds vaguely original. With the band’s guitars demoted to a supporting role with big, industrial-sounding synths dominating the proceedings, it is one of the most interesting tracks on the album, the one that should act as the foundation for album #2, if they make it to that stage.

If Swim Deep is the wise father, and Peace is the rowdy son, then surely Be Slowly sets JAWS as the spectral holy ghost of this ham-fisted Trinitarian B-Town metaphor. They may have spent that extra year than their contemporaries fermenting, but that doesn’t automatically mean that they’ve turned into a vintage. It’s a decent, yet unspectacular debut album from a band who do occasionally have the knack for a good tune, even though it might not sound like it is completely theirs.