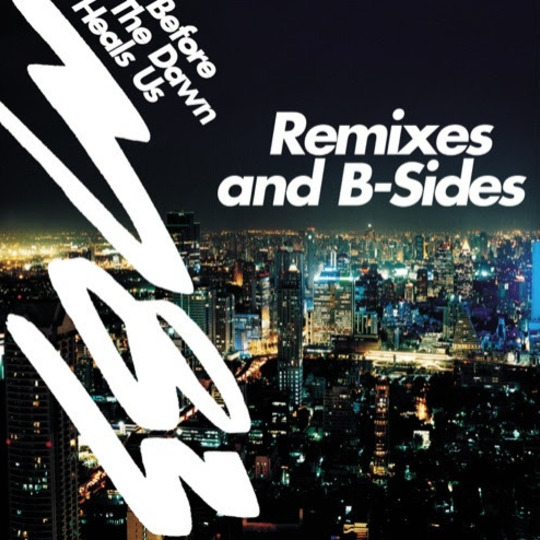 Close to ten minutes pass before a shot is fired in anger on 'Dead Cities, Red Seas & Lost Ghosts', the title track to a record that neglected to include it. Even then, the transition from abstract noise to something more elaborate 'tis but a scratch. A disquieting hum, previously untouched by outside echoes, is pierced by a rasping synth. Strings wrap around an arpeggiator and we're gliding through Vangelis Country, frame by vivid frame.

No great surprise. M83 and futuristic celluloid go hand in searching hand. In truth, you could play the second half of 'Dead Cities…' over any section of Blade Runner or its contemporaries and the imagery would dance appropriately. Many of M83's pieces - not just the more reticent ones - invite the listener to create their own visual accompaniment. At 17-and-a-half languid minutes, 'Dead Cities…' turns that invitation into a demand. As ever, a sense of wonder comes through, but it's a gradual unearthing.

It could have fitted in at the end of the record that took its name, but 'Beauties Can Die' offered a superior conclusion to that narrative. As an opener to this companion collection of remixes and B-sides, however, it works, not just by virtue of being the most 'complete' track on display - though it is that. Overall, 'Dead Cities…' feels like something of a moderate warm-up exercise for Anthony Gonzalez and Nicolas Fromageau - a precursor to more focused energy and action. 'Tsubasa', similarly, fails to make a case for its presence ahead of those that made the grade. If that seems like an obvious observation for a B-side, fair enough, but it's little more than an interlude peppered with the same textures found on Dead Cities, Red Seas & Lost Ghosts.

'God Of Thunder' is a more interesting proposition. Both for its vibrant nature and for what it would inspire. Deep into Before the Dawn Heals Us, end in sight, the straightforward though highly dynamic 'A Guitar and a Heart' screams in, gifting one final grand race to the stars. Its skeleton is found in 'God Of Thunder'; the basic idea, the climbing structure, the necessary pauses and, key to it all, the relentless drums, sketched electronically here before '…Heart' later breathed full life. An effective live version of 'Gone' brings M83 as close to post-rock as it will ever tread while three separate back-to-back remixes of 'Run Into Flowers' fight for attention. Jackson's breezy, playful mix - though as long as the other two combined - punches through. In between, Cyann & Ben's take on 'In Church' steals this assembly, deftly underpinning crystallised synth with scratchy acoustic guitar and harmonised vocals.

Before the Dawn Heals Us' collection of leftovers and reworks is a tighter affair. While, again, there's nothing here that strictly should have disrupted its parent record, there are intriguing glances behind the curtain. 'Addicted To Self-Mutilation' is shiner and happier than its name suggests, though its repeated refrain of "We are the children of tomorrow" feels too much even for M83. As with 'Dead Cities, Red Seas & Lost Ghosts', there exists the sense that Gonzalez (now minus Fromageau) is operating at half-speed.

'Until The Night Is Over' has more to say, stepping onto the platform provided by a beautiful piano line and plainly delivering a naked confessional. Once more, the lyrics are black and white. "I am cold and I'm lost, I'm standing in the rain/I'm not strong anymore, I'm just waiting for the sun". Unlike the navel-gazing generalisation of 'Addicted To Self Mutilation', the words here are given weight by Gonzalez's new-found solo status. Still, such doubts would have no place on the triumphant Before the Dawn Heals Us. As the song stretches out and Dead Seas…-esque tones join the fray, the vocal grows resolute, the line eventually irrelevant. The surroundings, as always, take centre stage.

On the remix front, Montag's verson of 'Teen Angst' goes heavy on glitches and patches, stumbling a little before an aggressive conclusion. 'Don't Save Us From The Flames' gets two edits and though Superpitcher's sublime 10-minute masterpiece towers above everything on these EPs, the Boom Bip mix is covered in its own scattershot glory. Those aforementioned ten minutes, though. The best covers find something new. Think Johnny Cash's take on 'Hurt' or Sinead O'Connor's heart-stopping 'Nothing Compares 2 U'. The Superpitcher mix of 'Don't Save Us From The Flames' is its own glorious beast. Originals are rarely as complete.