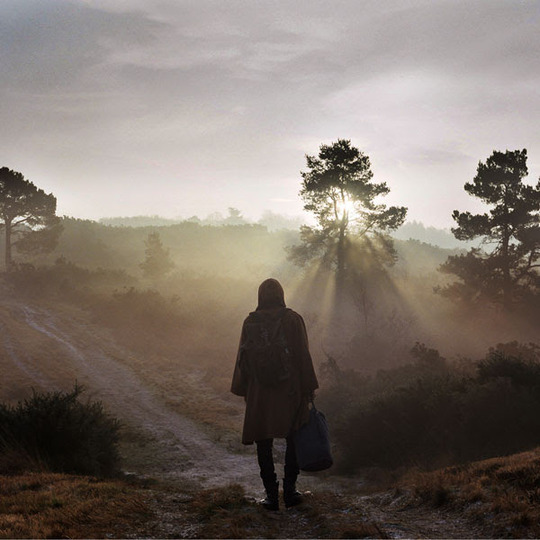 It’s always strange to watch the development of a band from their first release onwards. Looking back to 2009, and remembering the skeletal foundations Esben and The Witch built on debut EP 33, it’s not only remarkable to see where they've ended up but also rather surprising. This was a band who, on their early releases, used frailty as their greatest strength. Now, with the Steve Albini-engineered A New Nature, the Brighton-based trio have refined their sound to a point where it is leaner, but more powerful, than ever.

‘No Dog’, previously released on a split LP with Thought Forms earlier this year, is a case in point. Rattling along with propulsive bass and thunderous drums, only Thomas Fisher’s guitar really screams of subtlety. Even Rachel Davies’s fragile vocals sound tougher, as if there’s a fresh fire burning deep inside her. Her declaration that “I am no dog, I am a wolf” is an almost frightening cry of intent, of significance and of domination.

This is a welcome change from a group that, despite their obvious talents as songwriters and musicians, have occasionally sounded brittle as opposed to resolute. Indeed, 2013’s Wash the Sins Not Only the Face displayed a band sounding somewhat trapped between focused arrangements and dreamy atmospherics, failing to convincingly bridge the, often wide, gap between the two. On A New Nature these concerns are rendered mute by the dexterity of the trio’s songwriting.

Opener ‘Press Heavenwards’ is a ten-minute excursion that begins with a neat Godspeed!-influenced post-rock introduction and switches comfortably through the gears over its lengthy duration. It sets out the modus operandi for the album as a whole. The atmosphere of the songs remains at least as important to the band as their actual construction, that much is clear, but that doesn’t mean these pieces aren’t better put together than those on previous releases.

The epics of the album, ’Press Heavenwards’ and ‘Jungle’ – the latter of which stretches on for a colossal 14 minutes – demonstrate this perfectly. Climactic bursts of Swans, usually relying on the muscular drumming of Daniel Copeland, meld with the slow build of Talk Talk to create long form pieces that, although obviously indebted to musical pioneers of the diverse Eighties post-punk landscape, rely on a rather brusque sonic profile, referencing the classic Albini Nineties sound.

The result is a collection of tracks that seamlessly blend two eras of song based musical experimentation, something which, in itself, gives Esben and The Witch a contemporary personality of their own. The obvious comparison to these ears, and not just because of Davies’s vocals, is Portishead’s Third, another album which saw a band pursue a diverse selection of musical influences with increased clarity and purpose, albeit whilst willingly sacrificing some of their previous sonic characteristics.

A similar approach here has paid dividends for Esben and The Witch. Since 33 everything the band has done feels like it has fallen slightly short of the group’s potential. Whilst the 'gothic rock' vibe prominent on debut full-length Violent Cries is still apparent in the moody terrain that Esben and the Witch are still working in, A New Nature breathes more freely than anything this group has ever produced before and, as such, showcases a more confident and coherent band than one may reasonably have expected.