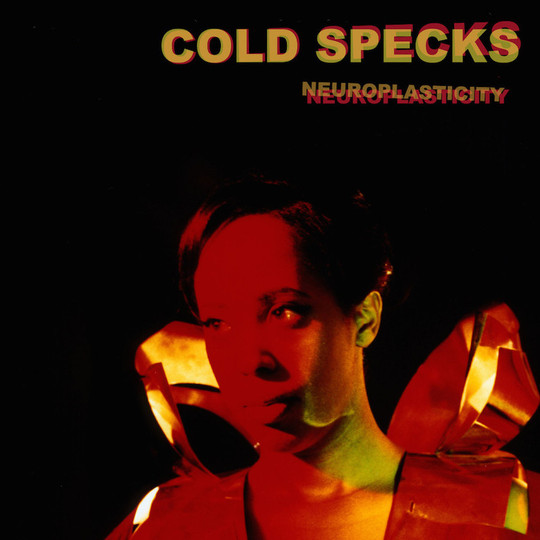 Cold Specks’ first record was a remarkably mature and well-developed record, one of the best of the year. She disowned it almost immediately. Over a year ago I saw Al Spx – voice, guitars and songs of Cold Specks – perform a set where she hated playing the songs of her debut. When I saw her a few months ago, she’s become more detached from them still. From almost immediately after releasing her debut, Spx was more than ready to release Neuroplasticity.

These songs evidence her eagerness to move into new territory, with swirling infernos of rasping New Orleans horns and guttural tones right at the hearts of dark red textures. It’s a wildly fiercer sound than before. And the main difference is Spx’ willingness to release the tensions she builds in her arrangements, rather than damming them up as she did on I Predict A Graceful Expulsion. Those songs hinged on subtlety. These lurch into sudden tempo changes, set songs ablaze with roaring noise, and bury double tracked vocal takes laced with decay and distortion.

It gets to the point of outright menace. Spx was never going to win optimist of the year, but the songs of her debut glowed from the uplift of soul performed without winking. On Neuroplasticity, the textures allow Spx to let loose with a threatening and desperate tumult of misery. She’s fixated on bodily destruction at every turn – people hung, drawn and quartered; knives going in; bodies needing to be kept at bay. And with the album’s final line, she turns the violence on herself: “I’ve got an unrelenting desire to fall apart”. By this point, the imagery is physical rather than emotional.

While Spx has made great strides in her mood and arrangements – and captures them beautifully in recording to boot – the actual songs of this album are ultimately less sharply defined than the last. Often, the melodies feel shapeless or underwritten, with many of the album’s choruses sounding like what would have been bridges on the debut. Ultimately, it was a breath-taking vocal performance wrapped around such assured song writing which made I Predict A Graceful Expulsion so arresting. To lose that on Neuroplasticity is undoubtedly a dent to her appeal.

It’s difficult to tell whether or not this retreat from robust melodic structure is purposeful. Judging by the disdain she shows for performing the old songs, there’s every chance it might be, and that the aggressive textures are the thing she’s chasing rather than fuller-blooded bona fide songs. But if so, Neuroplasticity too often has a foot in each boat between the looser, vocal-led arrangements of her debut, and the outright bedlam of highlights like ‘Absisto’. Her voice is as mesmeric and worldly as ever, and the instrumentation is rendered in beautiful detail. But it’s tantalising to wonder what would have happened if she would have given herself completely to chaos.