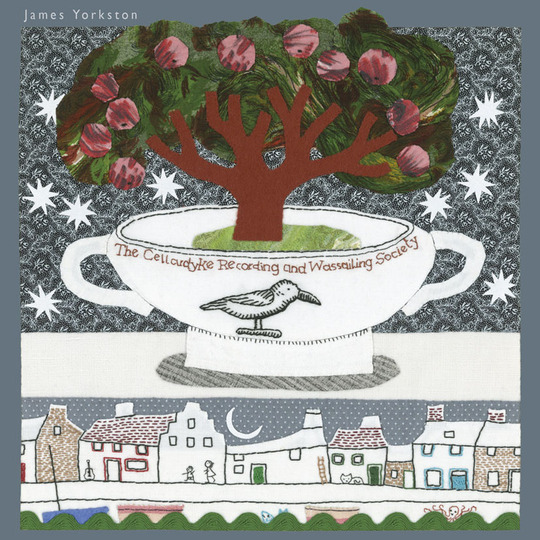 A new James Yorkston album – his sixth full-length LP of original material, and the first since 2012’s I Was A Cat From A Book – and on first listen it seems that little has changed in the Fifer’s soothing sonic arsenal. The same dreamy, half-awakened mood drifts across everything, songs gently rolling their way across your consciousness as Yorkston half-sings, half-talks his way through something soothing. It’s essentially the same pattern that he established back in 2002 on his landmark debut Moving Up Country, so it’s not too harsh to wonder what it is about The Cellardyke Recording And Wassailing Society that could make it stand out.

On closer inspection, two things emerge. Yorkston has always been a keen collaborator, having had Simon Redmonde, Kieran Hebden and Rustin Man sat in his production chair and what seems like the entire population of Fife appearing on his records, and this latest record is no exception. Here, Hot Chip’s Alexis Taylor is twiddling the knobs, and while he hasn’t turned Yorkston into a Hoxton Raver, he has brought some interesting elements into the studio. ‘Guy Fawkes Signature’ is a beautiful spoken word piece, pulled along by some gentle Chip-esque steel drums as KT Tunstall adds splashes of colour to the tale of a neighbour who just couldn't take a hint. The other collaborators on the record, including The Pictish Trail, Emma Smith and further appearances from fellow Fifer Tunstall, also help to draw out the strengths of Yorkston’s songs, often through a simple harmony or an instrument that weaves its way into your attention – the fiddle that accompanies the chorus of Feathers Are Falling or the gutsy duet of Great Ghosts being particularly effective examples. Taylor himself crops up on a couple of tracks, ‘Embers’ being a stately number that could probably work well as the reflective closer on a future Hot Chip LP.

The other main factor to highlight as a strength of CRAWS is Yorkston’s songwriting, and the world it draws you into. It’s not a concept album as such, but the lyrics and themes that tie the record together seem to all be in consideration of small town life, the gentle melancholia of a coastal Scottish town and the people that live there. They’re ideas that Yorkston has touched on before, but they seem particularly vivid here as he talks about his relationship with his children and the desire to both escape these locations and to retreat there. Personally, Yorkston has seen plenty of heartbreak amongst family and friends over recent years, and you can imagine that even the break-up of Fence Records would have given him pause to reflect, given his close ties to everyone involved. Without wishing to second-guess the man, you could suggest that such upheaval has given Yorkston extra reason to pause and reflect through his songwriting.

So yes, it’s another James Yorkston album, similar to those that have come before it, even in the ways in which it tries to stand out from its predecessors. It’s a tad long – 16 tracks could have been trimmed down to make the whole more effective – but it’s also the kind of record you’d want to put on and wallow in for a while, alongside a peaty single malt and a roaring fire, so it’s slightly rambling nature can also be seen as a virtue. A bit like returning to your home town, it’s a little bit different but essentially the same every time, and there’s always something comforting about that.