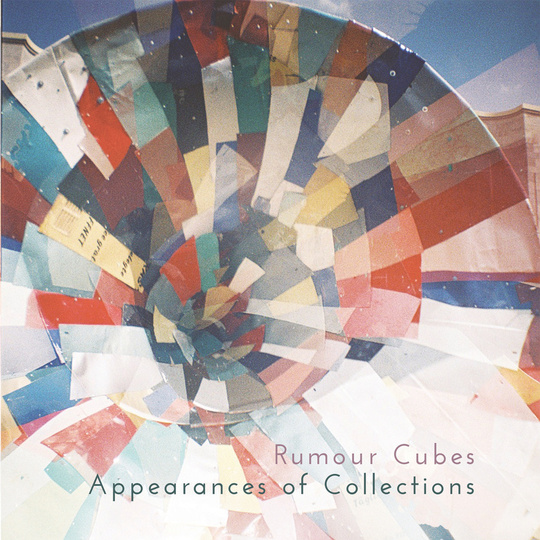 For London sextet Rumour Cubes the tail-end of summer must seem like the perfect time to be releasing a brand new record. With their caressing violins, gently sweeping guitars and shuffling rhythms, this is one band that adeptly captures the fading magic of a dying season of sun. The oncoming of autumnal haze in a red sky is sweetly crystallised by the coda of ‘Seven Year Glitch’ or the intro of ‘There is a Crack in Everything’.

The cynically minded will, of course, deride Rumour Cubes for their frequent use of traditional post-rock tropes. It’s certainly true that there’s little that makes Appearances of Collections stand out from many of their peers. Like Talons (who were described in not dissimilar terms by yours truly on this website last month), however, Rumour Cubes do have personality. The slow builds of tracks like ‘A Homecoming’ and ‘Your House Isn’t Haunted, You’re Lonely’ are handled with a warmth that comfortably atones for any negativity generated by the slightly predictable nature of the compositions.

Then again, Rumour Cubes don’t always do things completely by numbers. There’s a sense of excitable movement to ‘Hiyat’ that rather belies the generally reflective mood of the album. In a similar vein the rather jaunty bass line that helps launch ‘Straight Lines and Distances’ contrasts noticeably, and pleasingly, with the overall sobriety of the piece. ‘Do Not Go Gently’, meanwhile briefly explodes three-quarters or so of the way through its running time, as if slipstreaming from a digital to analogue world and back out again. ‘Research and Destroy’ even opens with a western-tinged guitar that briefly threatens to resemble latter day Earth. Eventually that track dissolves into squalling guitars and cataclysmic strings and percussion, making for the album’s most dynamic moment.

Slightly frustratingly, but perhaps somewhat appropriately for an album entitled Appearances of Collections, this record loses ground by feeling a little like a collection of memorable moments rather than of fully convincing complete tracks. There are plenty of highlights here but some of them shine outside the context of the songs they are a part of, which is a genuine shame. The album closer, ‘That’s How the Light In’, is also something of an anticlimax as a result of sharing its bones with the aforementioned ‘There is a Crack in Everything’. It’s a perfectly pleasant reworking but lacks the extra power of the penultimately placed ‘Research and Destroy’, which would have made an excellent closer.

Ultimately though, largely thanks to the vibrancy and confidence that is on display across the nine tracks presented here, it is difficult to level much genuine criticism at Rumour Cubes. Sometimes it is nothing but churlish to point out what a band lack as opposed to focusing on what they have and, clearly, Rumour Cubes have the skill and, more importantly, the heart that many of their contemporaries do not. This is music overflowing with a delicate, but nonetheless significant, passion. Rumour Cubes are a band that deserve your support.