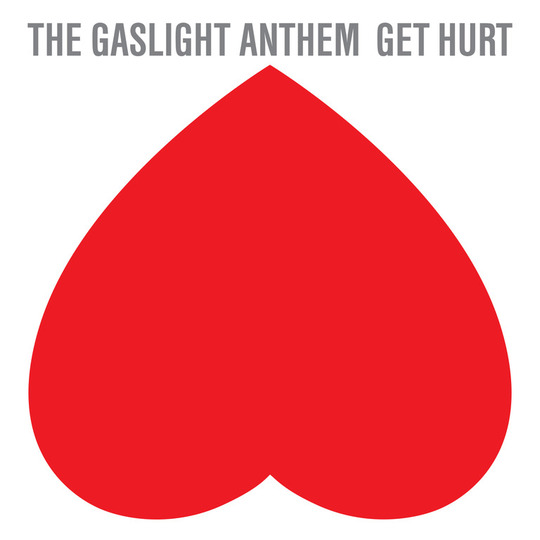 If you think about it, and apply just the teeniest bit of interpretation, each addition to The Gaslight Anthem's catalogue of albums from 2007 onwards possessed a title that encompassed its theme. Debut Sink Or Swim is self-explanatory in its statement of intent; a homegrown band taking their chances as contenders with the world. Breakthrough sophomore The '59 Sound further established their aspirations to music outside their circle of punk-based peers, an appreciation of tradition in an ever-changing cultural landscape. Ditto American Slang. 2012's swaggering, sun-kissed Handwritten was literally penned into notebooks by tattooed hands in a convergent, digital, often distant age of Instagrammed memories and tweeted thoughts and feelings. It's unsurprising, then, that an album called Get Hurt is the most brooding, ashen release yet, and not quite with their usual sombre charm.

The differences that frontman Brian Fallon personally threatened are immediately noticeable as soon as the aptly-named 'Stay Vicious' pours in, its fuzzed grooves and huskier delivery providing a stark contrast to their usual, sometimes minimalist, melodies, although these do arrive quickly and in an almost whispered, lullaby form. While Handwritten was an emotional heavyweight that relished in melancholic nostalgia, Get Hurt finds sustenance in the darker corners of worldly observation, of regret and rejection.

The title track, for all its radio rock twinkling, is an admittedly palatable addition to the buffet, but it becomes something of a desert oasis in relation to the the more vacuous, introspective spaces and the lack of incendiary driving music that characterised past releases. That's not to say this record is a complete transformation or that they aren't recognisable as the band capable of writing 'Great Expectations' and 'Mulholland Drive'. New cuts like the rollicking 'Helter Skeleton' and lead single 'Rollin' And Tumblin'' seize that emotive joviality – oomph, to use the scientific term – and are the ones most likely to prop up Get Hurt retrospectively. It's just that the old celebration of the highs and lows in the lives of shit-eaters like us is largely retconned as aggressive moping. Fallon, a songwriter always so able to conjure vivid images of working class American life, no matter how harsh, still dots this fifth record with touchingly simple lyrical flourishes, but it's now occasionally to the point of laughter, like when he croons 'if I thought it would help, I would drive this car into the sea' on finale 'Dark Places'. The very essence of this band is the ability to bring about the apotheosis of small town, blue collar life into an arena-filling, shared experience. Such flashes still exist, but relentless introversion somehow isn't quite conducive to them.

Still, it's a change that The Gaslight Anthem appeared to consciously and conscientiously make. Does a band releasing an album designed to challenge listeners and critics work as a Get Out Of Jail Free card? Whatever the case, to possess some vision and unapologetic creativity in an oft-diluted mainstream rock scene merits a degree of respect, even if that means few repeated listens.