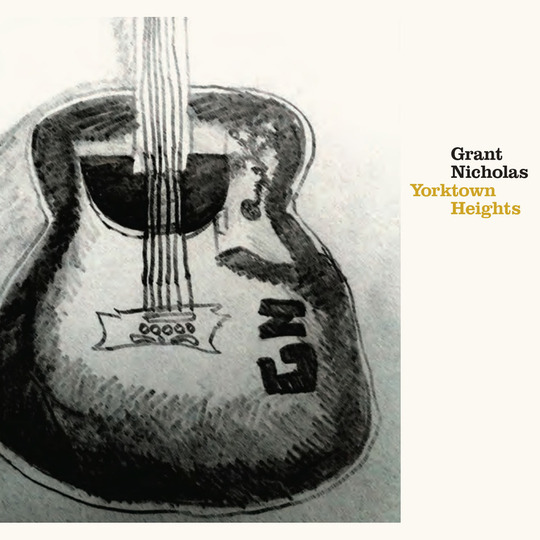 Next year marks the twentieth anniversary of Feeder's debut release, and with eight albums under their belt and over three million sales to boot, their status as one of the UK's most established bands is assured. Which is just as well for main songwriter and frontman Grant Nicholas, who has just embarked on his first venture as a solo artist.

Collecting thirteen songs in total, Yorktown Heights is a diverse, eclectic and positively bold move clearly orchestrated by a passion for creativity rather than any possible commercial gain. Recorded over the course of fourteen months in various locations spanning London to New York to Banbury, it's an ambitious assortment showcasing Nicholas' talents both as a songwriter and arranger of distinctive merit.

Taking inspiration from the likes of Nick Drake and Nick Cave as much as anything sitting in the Feeder back catalogue, Yorktown Heights provides an insightful look into its creator's melancholic side. For the most part at least.

While genteel opener and first single 'Soul Mates' revels in its upbeat persona ("You're the voice inside of me, bringing joy and harmony"), it soon gives way to Nicholas' darker recesses. The reflective 'Hitori' - key lyric "Sorrow will find me wherever I go" - and atmospheric Beatles tinged ballad 'Tall Trees' both deal with loneliness and yearning for something better.

The theme continues on 'Robots', one of Yorktown Heights standout tracks. Similar in structure to Doves at their most insightful, it finds Nicholas asking "Why should we go on feeling this rejected?" over a simple acoustic melody infused with dashes of sparse electronica. The rockier 'Joan Of Arc', Yorktown Heights' "murder ballad" according to its creator, is perhaps the closest soundwise Nicholas gets to the more familiar territories associated with his regular outfit. 'Isolation' and 'Time Stood Still' being two other Feeder-esque moments here.

It's on acoustic laments like 'Silent In Space' and closer 'Safe In Place' that Nicholas carves out a niche for himself. With esteemed engineer-cum-producer Brian Sperber (Dinosaur Jr, Guided By Voices, De La Soul) at the controls, the former takes on a new lease of life. "We'll all just be forgotten," insists Nicholas during the song's refrain. Melting effortlessly into the latter, a self-effacing sentimental ode that sums up everything Nicholas set out to achieve here.

Whether or not Yorktown Heights is merely a stopgap until the next Feeder record remains to be seen. Nevertheless, if this was little more than getting that difficult solo album out of his system, Grant Nicholas should be felicitously chuffed at the results.