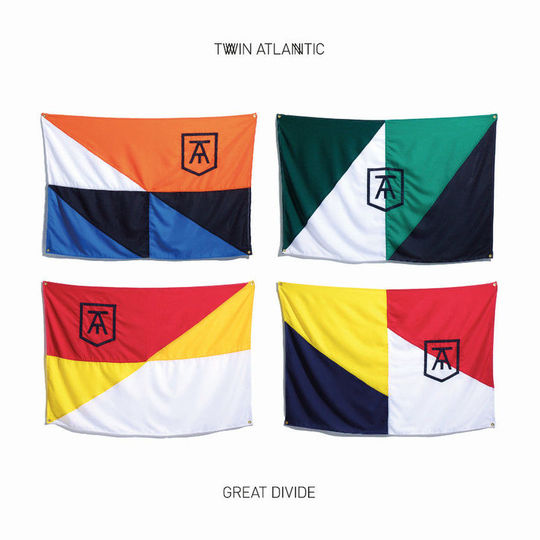 The release of Free by Twin Atlantic back in 2011 left the Scottish band on the cusps of mainstream acceptance, with a few pleasant singles and an increasingly devoted fan base signposting their inevitable rise to festival ubiquity. Now three years later, the band have given us The Great Divide , the album that should complete their transition into household names. Whether it has any right to however is a different matter altogether.

After a slushy piano-based intro track, the album gets properly going with ‘Heart and Soul’, a song which seems to have been formulated in a laboratory to be as commercial radio-friendly as possible whilst still allowing it to create the pretence of being a rock song. Admittedly, it’s a pleasant enough ditty that ticks all the guilty pleasure boxes, but it doesn’t get away from the fact that it’s essentially a One Direction song with added bum fluff.

Unfortunately, it is also the highlight of The Great Divide . The rest of the album falls into two main categories after this – well-meaning attempts at Biffy Jnr stadium anthemics on tracks like ‘Hold On’ and ‘Fall Into The Party’, and slower, emotionally overwrought songs like ‘Rest In Pieces’ and ‘Oceans’. In either case, they are unable to offer anything of any great depth to hold things together. When they sing on ‘I Am An Animal’ of being like “an empty jar” , they could quite easily have been writing about the sound of the album – perfectly functional, but would be of more use if there was something in it.

Then again, perhaps this album wasn’t made for me. I imagine this album will be a smash hit with the tween/adolescent crowd, those youngsters who are only just discovering that there is indeed music that isn’t generated on computers. The lyrics of the album seem to be targeted mainly at that audience, as if to say 'hey kids, I know exactly what you're going through', whether that’s on the songs of increasing sibling dissonance on yawnsome power ballad, ‘Brothers & Sisters’, the polite attempts to encourage social activism of ‘Why Won’t We Change’, and perhaps most notably on their ode to wanting to remain devoid of all responsibility, ‘Be a Kid’.

Despite my negativity, I’m glad that a band like Twin Atlantic exist – they fit into that particular niche, like Feeder or You Me At Six before them, of bands that impressionable teenagers who are just getting into rock music listen to before graduating onto better, more mature sounds. It’s like the musical equivalent of the Ladybird edition of Gulliver’s Travels – sure, it might have all the barebones of what you’d like in the story, but by sanitizing it for their target audience, you’re left with a sound that is lacking in character and soul.

I don’t blame Twin Atlantic for releasing an album that targets a very lucrative, and very mainstream audience, but I only wish that they had given us something with a little more substance rather than the bland mess we’ve been left with. It’s going to sell by the bucket loads though, mainly to girls who have just finished nuking their once beloved One Direction albums in the microwave. But for me, I’m happy enough to be in the ‘no’ camp of The Great Divide .