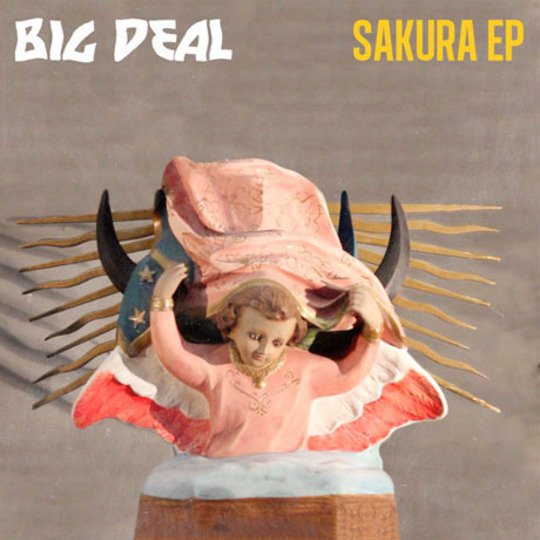 The last EP I reviewed was Polica’s Raw Exit, and cynical as I was about its commercial reasoning - it came attached to a ‘deluxe reissue’ of their excellent Shulamith, less than 12 months after the original - it did at least serve the kind of purpose that most quick-fire releases should strive for; it represents a stop-over between records, and hints at what might be next for the band.

That’s certainly more than you can say for Big Deal, because with Sakura, they sound as if they’ve regressed from last year’s fine full-length, June Gloom. That record had a genuine vibrancy; sure, the transatlantic duo were doing nothing new, in terms of where they were taking their cues from, but they brought an energy to their influences that made for a perfectly enjoyable pop affair. Encouraging, too, was the fact that they were beginning to experiment with their own boundaries; touches of Sleigh Bells here, hints of grunge there.

Perhaps that’s why it’s surprising that Sakura sounds so bland; it’s as if those hints of sonic ambition have been stripped away, with startlingly little left behind. Opener ‘Talk (Reprise)’ is a run-through a track from their debut album, Lights Out, that’s clearly supposed to be noisier and more aggressive than the original, which was sparse and deliberately paced; instead, it’s turgid and overblown, with the dual vocals given no room to breathe by all-encompassing guitars.

‘Always Boys’ is probably the highlight, sonically at least, although I’m not convinced it would’ve stood out on June Gloom; the guitars, fast-paced and washed-out, do their share of the heavy lifting in terms of generating atmosphere, but it’s Alice Costelloe’s unusually lethargic vocal turn - and banal lyricism - that undoes much of the good work pretty hastily. The title track, meanwhile, aims for laid-back and manages insipid, instead; driven by acoustic guitar (although with plenty of reverb), it also sees the duo make the mistake of thinking that overlapping vocal lines equal harmonisation - there’s little of the invention they’ve demonstrated in the past, on that front.

‘Figure It Out’ does a better job of the vocals, actually; Costelloe, in reverting to backing KC Underwood, delivers her strongest performance out of the four. It’s at this point you realise, though - via the track’s repetitive riff and monotonous percussion - that the EP has gone precisely nowhere. Instead of building on what went before, or providing clues as to a future direction, Sakura sounds like a collection of B-sides - and forgettable ones at that.