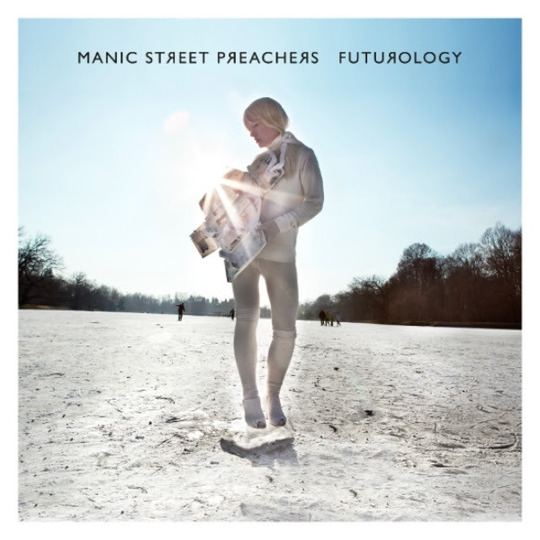 That, however, would be to unduly snark at Futurology, the second good Manics album in nine months, and one that shares many virtues with last September's Rewind the Film while sounding surprisingly little like it.

To me, the rest of the trio’s post-This Is My Truth Tell Me Yours output has felt in thrall to the band’s past: either a reaction against their monstrous late-Nineties success (Know Your Enemy, Lifeblood), an attempt to recapture their monstrous late-Nineties success (Send Away the Tigers, Postcards from a Young Man) or a stab at reconnecting with their hip, serious younger selves (‘The Masses Against the Classes’, Journal for Plague Lovers). But Rewind the Film felt like the first Manics record in 15 years that didn’t fret about its creators’ place in the world - in its acoustic chassis, willingness to sound completely un-Manics-like (James Dean Bradfield frequently ceding lead vocals to guests) and intrinsic modesty, there was no sense of agenda, manifesto or nostalgia for the band’s own past.

Futurology is a tricker beast, and probably a slightly less successful one. But musically, it has the same sense of freedom as its predecessor. There's no sense of contrivance or calculation, and though early Simple Minds are voguish at present, there is zero sense that the band are nodsing to Jim Kerr and cohorts for any reason other than love. Swooshing instrumental ‘Dreaming a City (Hughesovka)’ is sort of ridiculous for simply being a full on recreation of the Scottish band’s classic instrumental tracks (‘Theme for Great Cities’ etc) rather than make any effort to synthesise it into with the Manics' guitar rock. Though this is exactly what they do on thrillingly unsubtle single ‘Europa Geht Durch Mich’, a joyously mental kraut/glam hybrid on which a ferocious guest vocal from German actor Nina Hoss causes Bradfield to up his game to Holy Bible-levels of barking on a paean to the escape of European motorways that kind of sounds like Krafwerk’s ‘Autobahn’ leading on into Armageddon. It’s good, it’s different, it’s a future of sorts.

That’s the music, anyway: perversely, Nicky Wire’s lyrics on Futurology read like the most self-examining of his career. Lead track 'Walk Me To the Bridge’ seems like an explicit song about his old sparring partner Richie Edwards, a warm remembrance of his "intellect" and nights spent at “the indie disco” paired with a title and lines that seem like a pretty unambiguous acceptance that he died at the Severn Bridge ("I reimagine the steps you took").

As a rule, though, the songs seem to be mostly about Nicky Wire. ‘The Next Jet to Leave Moscow’, which kind of mixes the hazy prettiness of early Cure with a bit of major chord Springsteen strum, comes across as a pretty merciless dissection of the lyricist's politics, crucifying his own champagne socialism with a riposte at the band’s most ostentatious lefty gesture: ”so you played in Cuba did you like it brother? I bet you felt proud you silly little fucker”. And on ‘Misguided Missile’, which again sounds early Cure in its coldly beautiful keyboard wash, Wire seems to take himself to task for his bludgeoning misanthropy - “I am a self obsessed fool, I am a misguided missile, I am the Sturm und Drang, I am the Schadenfreude”.

While Wire’s still capable of being facile - the PiL-ish stomp of ‘Let’s Go To War’ and XTC pop of ‘Sex, Power, Love and Money’ house some spectacularly stoopid lyrics - in general he seems to have hit upon a more piquant vein of introspection and self-analysis than in previous years.

The magnificent, semi-chanted title track is perhaps the first song the band have written since Generation Terrorists that’s actually about the Manic Street Preachers, a veritable monument to their doggedness, a summation of their past, present and future: “One day we will return, no matter how much it hurts. And it hurts”. It’s a splendid track, the towering dignity of their late-Nineties incarnation pepped up with spry, wiry screeches of guitar from Bradfield.

Futurology does have its faults, and they're very Manics-ish faults. For starters, there’s something inescapably dilettantish about aspects of their 'new' sound'. Though the Simple Minds/Kraut influence is the closest the album comes to a musical through thread, we’re really only talking about four or so tracks - the rest of the album may be stylistically located in the same era, but the band make too merry with the sounds of the late Seventies to really nail a mood. Part of the problem is accommodating guest vocalists: Hoss’s storming contribution aside, the abundant outside help that so enriched Rewind the Film feels like a bit of a dead weight here: led by Welsh songstress Georgia Ruth, the gloopy, ‘Divine Youth’ doesn’t really fit, and though it's a small coup to get Green Gartside to sing on the Scritti Politti-esque ‘Between the Clock and the Bed’, it’s kind of dull, a slightly forced, project of a song.

But even in its misfires, Futurology feels liberated from the weight of the band’s legacy. The bloat of Tigers and Postcards is gone without a trace; in its place is the sound of a band that’s slain the AOR dragon and finally got back to making the music they feel like making. And if Nicky Wire chooses to write songs about Richey, well you know, good for him: nobody will ever forget the Manics have a past, but it finally feels like they have a future again too.