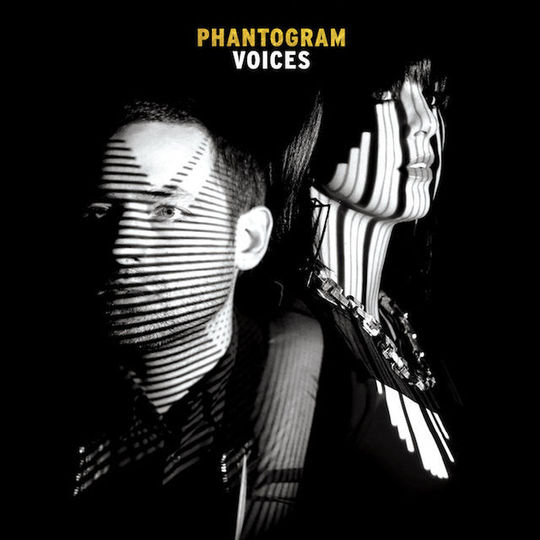 We poor, embattled British critics are in for a hard time writing about the new record from Phantogram. I know, I know - woe is us. Still, the problem is an intractable one, so have a heart. It’s this: those with even a passing interest in Voices will have already heard it.

And we’re not talking a cursory week-before-release stream either; its official US release was back in mid-February so it’s been a mouse click away ever since, now fully absorbed by anyone caring to listen. So for all I may mobilise my adjectival arsenal to describe the record’s guitar gauze and synth swamps and politely shuddering beats - and hey, there are 700 words to lay out here, so I’m still going to - I’m savagely aware minds are already made up.

But does the delay speak of deeper issues? That a four month gap was deemed a good commercial idea in the Internet Age is telling. The days of discreetly discrete releases for specific territories are long gone courtesy of technology. But the other side of the (bit)coin is that online buzz remains crucial to success. Phantogram wisely chose to take their time over Voices, sensibly adopting pragmatism rather than quickly follow up on the frothy blog buzz that propelled 2009’s excellent debut Eyelid Movies to wide appeal. Still, you’d think they’d insist it went everywhere, all at once.

Actually, the sole advantage in this situation goes to us oft-maligned hacks. We don’t run the risk of a Lana Del Rey style fan backlash here when slicing through to the simplest explanation for all of this, Occam’s razor style: Voices is only an average record.

It’s definitely an accomplished one with plenty to recommend in its sonic traits. Indeed, in those terms it’s certainly next-level, the material given a leg-up by co-production from John Hill (MIA, Santigold). ‘The Day You Died’ sees a giant boa constrictor of a guitar riff choke the life out of a drum machine snapping out breaking beats as Sarah Barthel sings “I don’t care to say goodbye ‘cause I’m feeling nothing / a signal to your heart / we got nothing at all,” all supposed ambivalence undercut by the drama of her stratospheric vocal and its layers of echoes. It’s the band’s strongest song yet, a glorious coalescence of everything that Phantogram can do so well, eclipsing the felicitous ‘Don’t Move’ from 2011’s wonderful Nightlife EP in the process.

‘Fall in Love’ takes a similar lyrical tack in a song about a vengeful, accidental relationship - ”you were the car I crashed now you’re burning alive” - bookended by a skipping stone of a string sample, with big, meaty beats and a delicious bridge of gently prodding synths. ‘Bill Murray’ (no, I’ve no idea either) is sweetly sparer still, with its woozy guitar arpeggios and treated, pulsing vocals. Yet at no point does the record demand too much attention; beyond and despite the sleek production values and knowingly gritty preoccupations there’s frustratingly little that really gets under the skin.

Brass tacks time again: it’s because the songwriting is a bit less interesting than before, maybe a conscious concession to claim a more middle ground audience. Dismissive romanticism remains the lyrical order of the day - from the off Barthel even coquettishly warns us “don’t listen to me, I’m nothing but trouble” but, in ironic keeping with the metaphor of a stuttering relationship, the record is a lot of effort without much reward. An unswerving thematic focus with the uber-slick production then makes things a little antiseptic.

Voices is also sometimes let down by its titular concern. Barthel has a lovely, airy timbre to her voice but it’s no powerhouse of an instrument. That’s obviously in no way an intrinsic problem, nor a criticism per se, but it just can’t bend a song raggedly to its will as such tortured material demands. ‘Howling at the Moon’ even needs subtle double-tracking to see it through, but has a weak sauce chorus; the record seems to actually work best when there’s less going on and her voice can truly shine.

It’s a real pity, for here’s a band whose sound has rightly had much made of it. Equal parts naive and smart, its guitar noise shaped by shoegaze and welded to clattering, juddering electronica, it’s difficult to think of many other acts with a similar sonic latitude that lends itself equally to collaboration with Wayne Coyne as Big Boi, both of whom have worked with Phantogram recently. It’s also an idea with commercial legs - just look at how Chvrches have recently soared to welcome ubiquity. Yet this is a solid rather than spectacular listen.