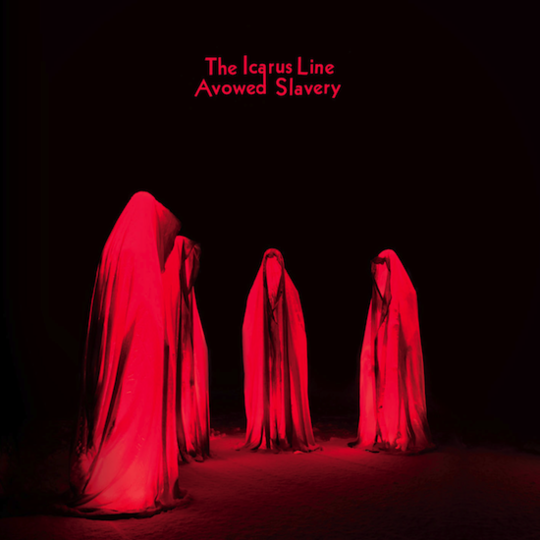 If their release schedule is anything to go by, The Icarus Line’s attitude to writing and recording mirrors the aggressive commitment of their live shows, both in terms of the relentlessness of their touring calendars and their penchant for leaving absolutely nothing in the tank, energy-wise, night after night. This five-track EP, Avowed Slavery, follows hot on the heels of last year’s superb Slave Vows album; if the similarity of the title and artwork doesn’t have the penny drop for you, the accompanying blurb charmingly describes the release as 'the other arm getting a shot.'

It’s difficult to shake off a feeling of cynicism with these kinds of releases because you immediately have to wonder if these are tracks that weren’t deemed worthy of making the cut first time around. Opener ‘Leeches and Seeds’ isn’t much quicker getting down to brass tacks than its slow-burning opposite number from Slave Vows, ‘Dark Circles’; it’s all ominous flickers of bass and barely-anchored vocals, with the guitars and percussion - rapid lines high up the fretboard, occasional shakes of the maraca - conjuring up images of insect swarms.

‘Junakdelic’ kicks off in similar fashion, but quickly undergoes a couple of landscape changes; first, it enters into a monotonous, Nick Cave-aping bluesy strut, before collapsing into a clattering wall of noise late on. ‘Raise Yer Crown’, meanwhile - the shortest cut on the disc, at just shy of five minutes - pulls off that sleazy menace with much more of a flourish. The problem, really, is that it doesn’t really go anywhere, with singer Joe Cardamone on directionless vocal form. ‘Salem Slims’ demonstrates that, often, The Icarus Line’s penchant for simmering tension is best restricted to short stretches; when the track explodes, messily, into furious guitars late on, you’re glad that you were at least afforded the opportunity to catch your breath at the midpoint.

In fact, none of Avowed Slavery is quite as urgent as I’d expected; to be fair - running at around 35 minutes, this is far from your typical EP. Perhaps that’s why, by way of comparison to the record it’s intended to accompany, it’s a mild disappointment; I looked forward to hearing Slave Vows’ sheer ferocity boiled down to a pithier product, but it isn’t to be here. Keen editing is likely what kept these songs from that record in the first place, and yet that's something unfortunately absent from the bloated Avowed Slavery.