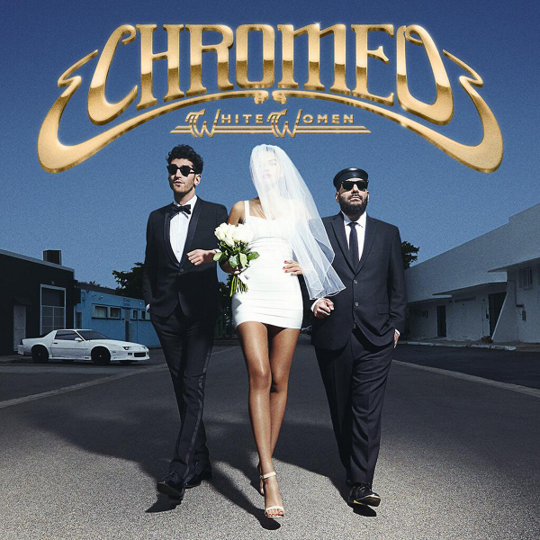 There’s two schools of thought that exist when it comes to Canadian electrofunk duo Chromeo. Firstly, there’s the people who aren’t too bothered about probing the deeper intricacies of their jaunty musicality (or the slightly more troubling fact that, individually, they go by the stage names Dave 1 and P-Thugg) and are thus content to both consciously and semi-consciously revel in the toe-tapping rhythms and uplifting vocals that have been staple adornments of Chromeo’s output since their emergence in 2004.

But countering that movement are the puritanical set, who sniff derisively at the chirpiness of the Chromeo vessel and would smash, to extend this oceanic metaphor, their lighthouse light in the hope it would sink without trace.

But how dare those people exist, because don’t they know how to have fun? And if not, can I recommend that they whack on White Women and learn? Yes, here is Chromeo’s fourth record, affixed with a questionable title (lifted from the name of a collection by German-Australian erotic photographer Helmut Newton) that’ll go nicely with the more-than-questionable choices of movement that you’ll start to make as you pull shapes whilst listening to this vivacious album. Now with ten years of XP under the belt and an increasingly fine command of the mainstream (the Toro Y Moi-featuring single ‘Come Alive’ is being used on the current Robinsons Squash’d advert, for Chrissakes), this may now be the time that Chromeo start to be considered as genuine contenders rather than simple court jesters.

Bursting out the blocks with opener ‘Jealous (I Ain’t with It)’, it’s hard to resist any and all of White Women's flashiness, with the driving drums and menagerie of shiny synths and slap bass producing the kind of sonic atmosphere that’ll slay dancefloors the world over. The inescapable Random Access Memories comparisons, meanwhile, will certainly pop into mind on the likes of the striding, stratospheric ‘Over Your Shoulder’ and the Nile Rodgers-esque guitar flicks on ‘Somethinggood’; though the latter does find itself unable to really get out of third gear. There’s also novelty retro pastiche on ‘Frequent Flyer’, which you could surreptitiously drop into the Vice City soundtrack without anyone feeling particularly pained to research its release date.

There are some things that might not sit right with some people, however. There’s the pacey yet potentially-controversial ‘Sexy Socialite’, where Dave 1 insists to the dismissive female vocalist that she is indeed a “sexy socialite”. It’s not quite ‘Blurred Lines’, but in a world where an outburst of Twitter outrage is only ever a hashtag away, playful aspects like the line “I wish you were a socialist instead of worrying about your name on a list” may just end up contributing a sentence or two to the current sexism-in-music debacle.

There’s also the strange interlude from Ezra Koenig that’s sandwiched right in the middle of the record, which feels like Chromeo thought it might be nice to let their mate sidle up and turn things all Vampire Weekend-y for a moment whilst they took a breather (presumably to quench their thirst with a tasty slurp of Robinsons).

But just before you go thinking that this is just a self-indulgent party album, ‘Lost On The Way’ turns up to take the platitudes as the songwriting highlight of White Women. Featuring the ever-glorious Solange on vocals, it’s a moment of gracefulness that showcases Chromeo’s evident knowledge of when and how to take things down a notch. As a result, it largely accounts for the mostly-pleasant ride that the duo take us on with White Women, which’ll hopefully entice those ensconced in the party-pooper faction to switch allegiances.