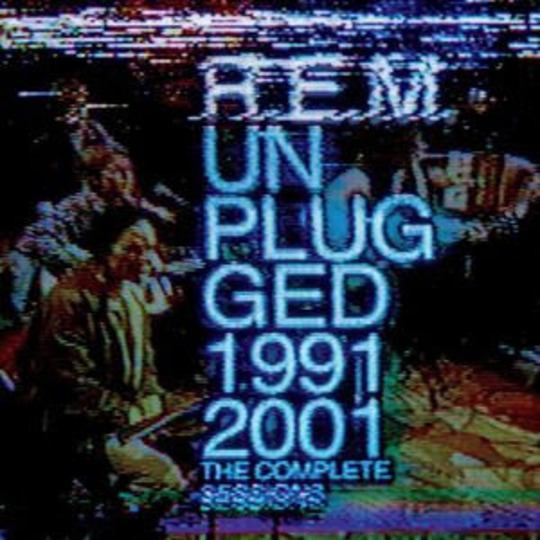 Though the person who invented MTV Unplugged is owed at least a light thwack in the genitals for inspiring Radio 1’s execrable Live Lounge, the show was, ultimately, one of the classier things about the channel in its pomp – a fair few of the acoustic concerts staged under its auspices were very good, with Nirvana’s contribution pretty much validating the series in and of itself.

So I was a little sad to note while, er, ‘researching’ this review that Unplugged has now been relegated to a very occasional online thing - which I suppose is inevitable given MTV doesn’t really play music anymore, but still, I’d vaguely hoped all my favourite indie-rock bands had been doing Unplugged shows, only I hadn’t noticed.

One of the few bands to appear twice were R.E.M., and it’s interesting – well, if you’re a terrible nerd it’s interesting – to note the shared fortune of band and broadcaster. The first time, in 1991, R.E.M. were skyrocketing towards being the biggest band in the world and MTV was their vehicle to the heavens. Tarsem Singh’s evocative video propelled ‘Losing My Religion’ to global ubiquity, and the band’s MTV concert was essentially in lieu of touring seventh album Out of Time, the time off the road giving the band the room they needed to bash out the monumental Automatic for the People just a year later.

The second time R.E.M. appeared, in 2001, things were different. MTV hadn’t quite given up on music yet, but it had kind of de-aligned itself with any scene - it had been the New Romantic channel, it had been the hair metal channel, it had been the grunge channel, it had been the alt rock channel… now it was just MTV, not really standing for anything. The launching of specialised channels was part of that, but the fact is MTV had parted ways with the zeitgeist, and the golden age of the music video was probably over – the most expensive videos of all time were overwhelmingly made in the Nineties.

R.E.M. had, by this stage, ceased being anything like the biggest band in the world, having followed Automatic for the People with the three weirdest albums of their career (Monster, New Adventures in Hi-Fi and Up). They were still a jolly big act, especially in Europe, but 2001’s Reveal - the record their second MTV concert was promoting - probably also marked the point where their hitherto unimpeachable run of artistic form began to wobble.

Does any of this actually have any impact on Unplugged: The Complete 1991 and 2001 Sessions, a first audio-only release for the concerts, now given a wider release after being issued as a Record Store Day vinyl last month? Weeeeeell maybe, maybe not:, it’s definitely notable that while the 1991 performance is a relaxed, crowd-pleasing set largely based around an album (Out of Time) that was acoustic anyway, the 2001 concert has a real air of elegy to it, old standards like ‘The One I Love’ pointedly reworked into slow, skeletal dirges, Michael Stipe’s voice low and rich and weary. A notable 1991 omission, ten years on Out of Time’s colossal, elemental ‘Country Feedback’ dominates. And it’s hard to hold back a small sniffle at a set that ends with Up’s pained ‘Sad Professor’ and its final, repeat line, “I hate where I wound up”.

The second concert feels a bit better realised, basically, but they’re both pretty good: R.E.M. were a great live band, and the acoustic format is a fine showcase for Stipe’s remarkable voice. And 1991 and 2001 complement each other well, as contrasting mood pieces and because by accident or design, there's very little overlap between discs (‘Losing My Religion’ is the only song to appear on both).

That accepted, Unplugged is another in a very long line of R.E.M. live releases you wouldn’t exactly call essential, if only because they set the bar so high with their concert films Tour Film and Road Movie.

But things don’t have to be essential to be worth owning. The Stipe-designed cover art – an alluringly shitty series of photographs of a television screen showing the MTV broadcasts – sets out this release’s stall, as a lovingly assembled historical record, the beginning and the end of a bygone era.