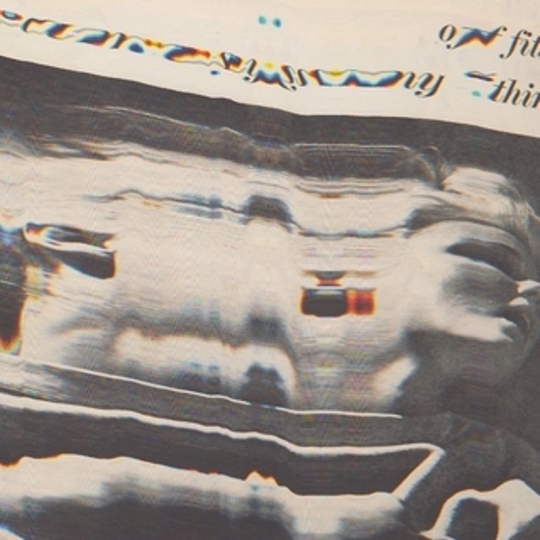 Brooklyn-based abstract noise duo Yvette have been making a name for themselves on New York's underground scene for the past five years. Ever since their self-titled EP came out in 2010, they've gradually established themselves as one of the most progressive experimental outfits on the circuit. Founder member Noah Kardos-Fein shreds guitars, while recent addition to the fold Dale Eisinger provides (mostly) caustic beats. Together they've created a visceral concoction of avant garde noise rock comparable to the likes of HEALTH, Weekend or Throbbing Gristle at their best.

Part of the Godmode family – having signed with the New York production imprint-cum-record label shortly after the EP's release – Process has been pretty much the sole focus of Kardos-Fein and former drummer Rick Daniel ever since. Indeed, Daniel provides the rhythmic textures here, not that such a discordant barrage of percussive insolence complies with any structurally defined concept of rhythm.

Instead, Yvette are about challenging the norm, taking it by the scruff of the neck and when possible, reshaping it outside and in from back to front. They're not concerned with any kind of genre classification: and if Process is anything to go by, they're downright impossible to categorise. Theirs is an unholy racket, born out of punk rock idealism for the technological age. Akin in many ways to Cabaret Voltaire's more primal ventures or Factory Floor pre-'A Wooden Box', Yvette may have existed for half a decade yet Process revels in its playful nature to experiment and change direction almost at the blink of an eyelid.

Opener 'Pure Pleasure' introduces itself via a wave of disturbing intensity. Screeching guitars compete with tribal rhythms and Gregorian style chants. Echoes of Einsturzende Neubaten and Test Dept. reign supreme as Kardos-Fein's quest to take amplified noise to another level reaches fruition. The haunting 'Cuts Me In Half' could be the soundtrack for one of Lars Von Trier's more incendiary celluloid cuts, its heart perforated by what appears to be the sound of a chainsaw during the song's final third.

Better still is 'Mirrored Walls', its dark presence encapsulated by a combination of distant drums, wavering atmospherics and Kardos-Fein enquiring "Do you feel like you're pulling apart?" with sinister ambivalence. Both 'Carbon Copy' and 'Tempered Glass' raise the noiseometer somewhat, the latter in particular seemingly taking its title literally. Former single 'Everything In Reverse' slows the pace down somewhat, its requiem mantra amply laying the foundations for 'Attrition''s all out aural assault.

The quasi-religious experience continues throughout 'Holding Nothing' before the effects heavy 'Cold Comfort' delivers Process back into its celestial state of white noise heaven. The cold industrial 'Absolutes' provides four minutes of harshly executed nihilism before heavily orchestrated closer 'Radiation' brings Process to a breathtaking if slightly pernicious end.

Overall, Process is a ferocious if at times delicately poised introduction to the incendiary world of Yvette, sonic adventurists extraordinaire.

Under Color Of Official Right