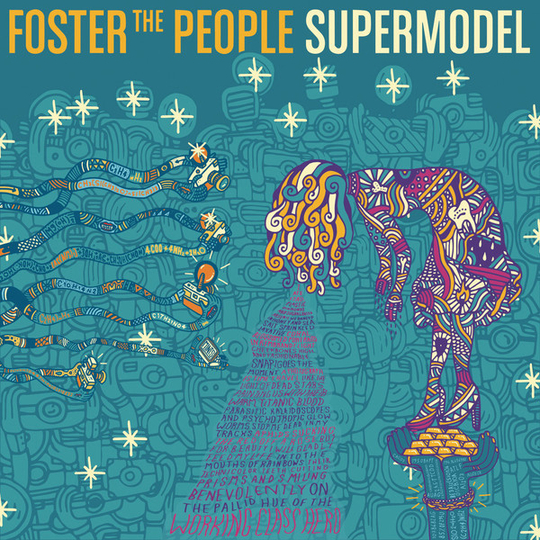 In 2010, Foster the People released their breakthrough hit, ‘Pumped Up Kicks’. The song, written about a school shooting, quickly propelled them into the limelight and earned them a major label record deal. In 2011, ‘Pumped Up Kicks’ was the sixth best-selling digital song of the year and, on the back of that success, debut album Torches performed very well indeed. It’s also worth noting that ‘Pumped Up Kicks’ is a fantastic song and deserved all the attention it got.

The problem this quite obviously presents for Foster the People is how they follow it. There are two ways a band might go about following extraordinary early success – the first is to subvert expectations and make a difficult album and the second is to create a record brimming with exactly what made their breakthrough so great. I'm happy to say that Foster the People chose the latter.

This is a record absolutely brimming with fantastic melodies and hooks – but with that tinge of darkness that has become trademark for Foster the People. On ‘Ask Yourself’, they talk of “coughing blood” and feeling unfulfilled – not your usual topic of choice for a pop song – and yet it still wouldn’t sound out of place on mainstream radio. The same goes for lead single ‘Coming of Age’, which deals with how they’ve been rushed to stardom over the past few years, but with that same ethereal vocal and leading bass line that you would have heard on Torches.

That’s not to say that Supermodel doesn’t explore any new territory whatsoever. The drums and vocal melodies on opening track ‘Are You What You Want To Be?’ bear the sonic hallmarks of being penned in Morocco. On ‘A Beginner’s Guide To Destroying the Moon’ they flirt with a grungier sound. On all these occasions though, they are merely passing glances at experimentation, with the album firmly rooted in their arena-pop ambitions.

The album’s strong suit is its underbelly of darkness. Supermodel is an introspective record, riddled with the self-doubt and exhaustion that comes with fame and a heavy touring schedule. By the time it rolls towards its conclusion, on ‘Goats in Trees’ Mark Foster sings “I’m on the outside and I’m falling apart” and on closer ‘Fire Escape’, the chorus rings with advice to “Save yourself”. It’s these touches that makes Foster the People a little bit more than just a pop band and takes them a notch above their contemporaries such as Bastille and Imagine Dragons.

Supermodel isn’t a life-changing album. And that’s okay because that’s not what it’s trying to be. Foster the People have created a dark, introspective, yet thoroughly catchy record that proves they deserve the success that they’ve created for themselves with ‘Pumped Up Kicks’. While nothing on the album quite reaches those lofty heights, Supermodel far outshines Torches as a whole.