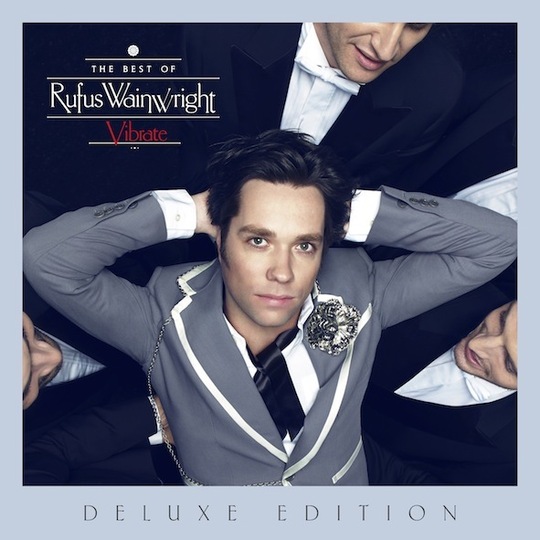 After seven studio albums and a number of live recordings, you might think an introduction to Rufus Wainwright would be unnecessary, but that's exactly what you get on Vibrate: The Best Of Rufus Wainwright. Labelled as a 'best of' rather than a greatest hits collection (his biggest ever hit, 'Going To A Town', charted at #54), this album approaches his music through a radio-friendly lens. An unabashed attempt to pull together the disparate strands of his sound - part troubadour/part popstar/part diva - into 18 tracks that shirk his more overt theatrics for mainstream success.

Throughout his career Wainwright has often struggled to find balance. A talented and witty lyricist with a stunning vocal ability, his work has vacillated somewhere between operatic bombast and garrulous self-indulgence, or muted restraint and hyper self awareness. In many ways his artistic fluidity should be applauded, but recently (speaking in an interview for the Gay Times) he's acknowledged that this dichotomy is problematic; "On one hand, I had the drive and ignition and the parts to dominate the world. To make loads of money and all of that stuff...But on the other, the fuel that engine took was the antithesis to that...I’ve always been trying to rectify those elements.".

It may seem obvious, but the LP's main highlights come from his earliest work. 'April Fools' and 'Foolish Love' brim with sweet romanticism and swagger, while 'Cigarettes and Chocolate Milk' - one of his finest compositions - applies wit and keen observation to the pitfalls of addiction. Want One - his first move toward grander sonic arrangement - has its complexities well represented across five tracks; encompassing visceral guitar pop ('Go On Or Go Ahead'), operatic torch songs ('Vibrate') and classically-infused bombast ('Oh What A World'). While the subtle yearning of Want Two's offerings ('The One You Love','Art Teacher') veer between melodic pop and sweet balladry, to craft something heartbreaking and remarkably perfect. Even his latter work - specifically 'Tiergarten' - finds greater form here; new depths revealed beyond the confines of its original context.

However, amidst this flurry of brilliance, it's hard not to notice some of the songs that have been excluded in favour of populist froth. Banished are the bittersweet theatrics and anthemic show tunes of Want One ('Harvester of Hearts', 'Beautiful Child', '14th Street'), while florid gems of baroque pop and blasphemous folk from Want Two ('Little Sister','Gay Messiah') feel glaring in their omission. In their place, we get the catchy but facile, Guy Chambers co-written newie 'Me and Liza', a couplet of wholly forgettable AOR from Out Of The Game and a by-the-numbers version of Leonard Cohen's Hallelujah'. The latter track - recorded for the Shrek soundtrack - solidifying its place as the most deeply unremarkable rendition of the song ever recorded.

The deluxe edition - which is usually the sole realm of the hardcore completist - has a further selection of 16 unreleased, soundtrack and live performances. It's stronger towards the first half, specifically on 'WWIII', 'The Maker Makes' and in a rapturous cover of 'Chelsea Hotel No.2'; the second half leaving casual listeners behind for a series of spirited, if occasionally ponderous, live efforts. The exceptions arriving on the stark beauty of 'Martha' (from his paired back album All Days Are Nights: Songs for Lulu - which has otherwise been exorcised from earshot) and a inspired group performance of his father's classic, 'One Man Guy'.

2001's 'Grey Gardens' opens with a quote; "It's very difficult to keep the line between the past and the present" - and it's keeping this line which is the quandary at the heart of Vibrate. For the uninitiated listener there is much to love, Wainwright's body of work is outstanding and - with Mother's Day on the horizon - he has scrubbed up well. But if you have more than a passing familiarity to his career then a nagging thought remains: that mainstream acceptance is seeing him shed the decadence and magniloquence which once made him unique. What is left is an exemplary but expurgated collection; two-thirds of the story from an idiosyncratic and restless career.