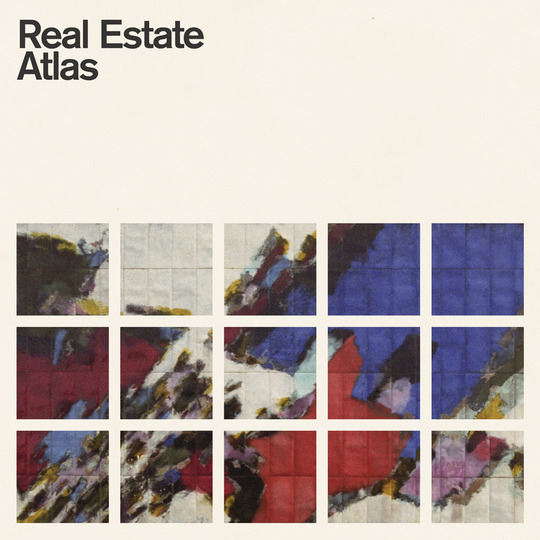 Real Estate are, more than most, a band borne of their environment. Three friends, Martin Courtney, Alex Bleaker and Matt Mondanile, met at high school in Ridgewood, New Jersey, and have made music together, and apart, ever since. Their first album was released on Woodsist, a locally based label, before second record Days saw them graduate to Domino, where they remain.

Two summers ago I went on a trip to New Jersey, and spent part of the summer moving around the suburbs there. It’s a lush mixture of woodland, affluent suburbs, pocketed by malls. When I listen to Real Estate I can’t help thinking back to those days, my memories of driving through the woods and canopies of the north-east USA. Mondanile’s guitar playing always sounds so florid, so spaced out, so lush, either when with Real Estate or his own band Ducktails. Alex Bleeker’s bass playing and songwriting is equally loose (he contributes a track here – ‘How Might I Live’).

It’s the kind of music that American bands do so well; to my foreign ears it speaks to big houses with garages or basements, of lazy hot summers and time spent playing together, growing up. Listen to Yo La Tengo, another resident group of New Jersey, or early REM and you get the same feeling and sound – formally relaxed, technically proficient.

Indeed, Real Estate have always been one of those bands that seemed to emerge fully formed. Whereas some artists can take years and albums to find their voice, Real Estate’s self-titled debut sounded like ‘Real Estate’, and everything since has been in the same vein. As such, a third album can feel like a crossroads. Will they become a band that, once they’ve found their niche, continue to mine that sound (say, Beach House); or one that explores and changes (say, Yo La Tengo)? Not that either is the ‘right path’ (Beach House have evolved as songwriters over their career, even if the structure and basic sound of their songs remains unchanged).

So the question here – apposite for an album titled Atlas – is where are Real Estate going? Is a band, to paraphrase Woody Allen, like a shark: it has to move forward or it dies? Atlas’s lead single ‘Talking Backwards’ is perhaps the most complete song Real Estate have written – taut, melancholy and beautifully melodic. It comes as a surprise then that the rest of the album is much more meandering. ‘Past Lives’ encapsulates a sense of suburban ennui that permeates the whole album. “_I walk past these houses where we once stood / I see past lives_”, sings Courtney, and throughout there’s the sense of a narrator caught between two world, of drifters and dreamers losing touch with either other as they head in uncertain directions ('Talking Backwards' is just such a hymn to miscommunication).

If ‘April’s Song’ is the low point of the record’s wanderlust – an affectless instrumental track that goes nowhere – elsewhere it blooms wonderfully. ‘Crime’ is its apotheosis, a song that drifts in pace and tone, Courtney’s thoughts similarly flitting and fleeting – “I don’t want to die / Lonely and uptight … All will be revealed”. ‘Horizon’, meanwhile, recalls an REM track like ‘Green Grow The Rushes’. It’s almost country-rock in its lolling rhythm, describing a couple lost to each other in a “rolling landscape”.

The imagery of lost time and places recurs in the title and lyrics of album closer ‘Navigator’ – “I have no idea where the time went”. Courtney affirms to his muse that “I’ll meet you where the pavement ends”, but perhaps the irony here is that it never does. To go back to the earlier question – where is the band going – perhaps the answer is nowhere. And maybe that’s how they want it. Courtney's songs circle around the suburbs, but they never really leave – they can’t. The point is the journey, rather than the destination.