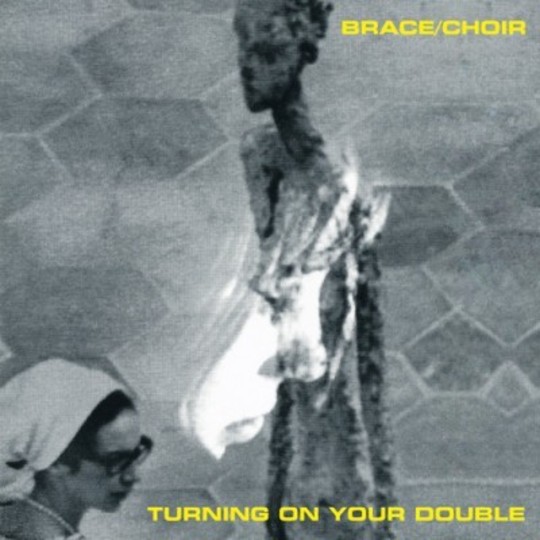 Let’s get one thing straight. This isn’t Hospice by The Antlers. There’s no wallowing in exquisite misery; no catharsis and cleansing exclamations of pain. Almost no suffering is inferred in Brace/Choir’s Turning On Your Double. To paraphrase another detached paean to mental illness, Charlotte Perkins Gilman’s The Yellow Wallpaper, it instead creeps around the room, carving its shoulder into the plaster. The distortion scratches at the mix, but never tears it completely, while the threat of explosion is always bottled and hidden before it can deliver.

Whether that makes this a record devoid of hope is another matter. The bright, hollow-body guitars frequently suggest light, cutting through a fog of repetitive krautrock rhythms and psychedelic organ swells. Themes of disorder and schizophrenia are heightened through the band’s decision to write and record each other’s lyrics and instrumentation, while disorientating production techniques layer different words on top of each other, creating a sense of discomfort that is both uneasy and compelling. The variety of ways in which the album title can be decoded (switching on? An erotic outcome? A violent act?) only adds to the murky allure.

That anxious compulsion is alluded to by the words within (“I have been very lucky / it’s not enough”) and the detached manner in which the band perform them enables the record to again echo Gilman’s doomed narrator and creep up through repetition. A sentence fragment previously unheard that suddenly becomes clear; a subtle organ swell that drastically alters the tone of the song; a hiss of feedback that suddenly brings menace to an otherwise unthreatening atmosphere – these are the places where the album will earn its devotion.

There are the remains of many bands here, too. ‘Be Let Down’ is a Mogwai ballad through and through, while ‘Coil’ recalls Munki-era Jesus and Mary Chain. ‘Satisfier’ ups the pace for a welcome injection of energy that echoes the frenetic abandon of The Velvet Underground as itchy guitars propel the song to its inevitable destruction. Crucially, though, these influences don’t detract from the distinct identity of the record. There’s a huge amount to like here, whether you choose to analyse the content or not. Suffice to say, however, that it’s not something to put on in the background – Turning on Your Double simply will not acquiesce to an indifferent listener. Like the afflictions it seeks to replicate, it’s going to take time to understand, and then more time to appreciate.

So, is it a complete success? Inevitably, no. Writing a debut LP about the nature of duality, power and sickness which demands complete attention as a single piece of work is an ambitious project. While there are truly memorable moments, such as the entire four-song stretch that closes the record, there are also missteps along the way. ‘Fallmen’ tackles the killing of Osama Bin Laden, but it staples that weighty subject to a wholly uninteresting structure that meanders for almost 10 minutes without much in the way of melody or evolution. Opener ‘Biond’ seems out of place, too, and isn’t enough to draw the listener into the album. Maybe the intention is to make listening pleasure a challenge from the outset, but there are enough inviting passages scattered throughout to suggest that alienation isn’t Brace/Choir’s goal.

This is unlikely to be a release beloved by millions. There is too much that drifts aimlessly and refuses to concede to traditional songwriting constraints. However, those who are willing to take the time and give themselves to the world Brace/Choir have created will find pockets of wonder capable of stealing the breath from their lungs.