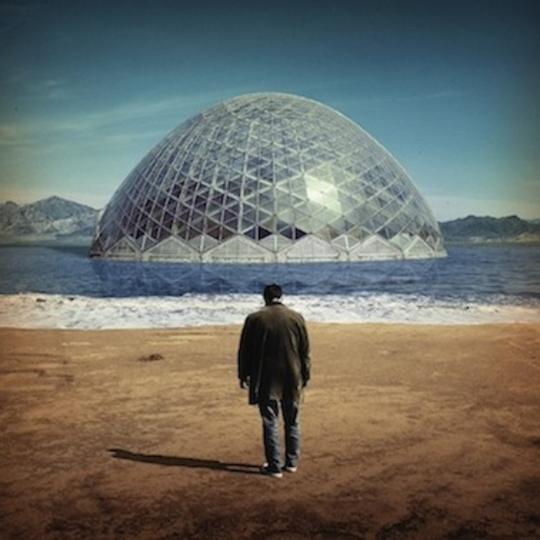 Since first working with producer Richard Swift on 2010’s Saint Barlett, Damien Jurado’s records have taken on a new focus, and have slightly reshuffled their priorities. While offerings like Caught in the Trees used unassuming arrangements as vehicles for robust songs, Jurado’s new approach places atmosphere above straight up songwriting. And as you can tell from the title of Brothers and Sisters of the Eternal Son, Jurado’s still reaching for the conceptual on this one, which plays out like a conceptual sequel to his last set, 2012's Maraqopa.

As with that last LP, Jurado is here fond of haunting his own vocal lines with the ghosts of faraway, falsetto harmonies. He loads things with rattling drums which swirl from speaker to speaker, smeared over droning synths and heavy reverb; softly fingerpicked guitars just peeking through the chinks in the textures. At its best, it beautifully compliments the narrative framework of a man who goes on a journey to find himself, never to return: the repetition in ‘Silver Donna’, all looping, syncopated call and response, reflecting the sense of transcendence that the songs are going for.

However, some of these songs feel like they aren’t so much complimented by their swooping production style, but need it in order to be propped up. Strip away the squelching bleeps of ‘Silver Malcom’, or the overwrought vocal filters of ‘Jericho Road’, and you wonder whether or not the repetitive, cyclical melodies would be able to justify themselves in the same way as material on Caught in the Trees does. You wonder about the ornate production style: is it an example of the tail wagging the dog?

This concern is thrown into sharp relief with the one-two of ‘Silver Katherine’ and ‘Silver Joy’ towards the album’s close. Both are softly whispered over gently fingered guitar patterns, allowing a soft, spare veil of strings in from time to time - a reminder of how strong Jurado's material can be when he gives it some space. It’s a double blunder in the sense that not only does it tower over the less developed songwriting of the first half, it also shatters the atmosphere to which he’d previously committed.

One of the best things about the approach Jurado and Swift take across this record is that while the arrangements have a bias towards the complicated, the textures rarely feel heavy or overstuffed. This is a genuinely impressive feat. The days of settling for the soft drum brush of a 4/4 beat are long gone for Jurado, but even as ‘Silver Timothy’s rhythm dances itself into un-clappable contortions, the modest woodblock takes up barely any space, and lets the core of the song get on with its business.

As with the album’s predecessor, you want Jurado to let the core of the songs come more to the fore (or otherwise he should commit to the exact reverse: completely giving himself over to a haze of unbroken atmospherics) The dub-littered textures and conceptual frameworks are admirable in their artistic reach, but Jurado’s greatest strengths are found at his most stripped back on Brothers and Sisters of the Eternal Son. Not coincidentally, the songs which he presents with least decoration are the songs which bear the closest scrutiny.