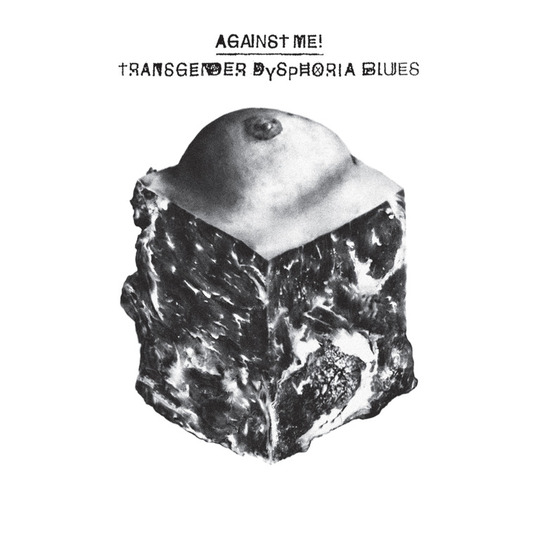 It’s not like she hasn’t tried to talk about it before. Going back as far as 2002’s ‘The Disco Before The Breakdown’, fixation with the body and ostracised sexuality has bubbled below the surface of Laura Jane Grace’s lyricism. These references became more overt on 2006’s ‘Searching For A Former Clarity’, telling stories of “dressing up in women’s clothes, compulsions you never knew the reasons to”, before 2007’s ‘The Ocean’ gave it to us undisguised: “If I could have chosen, I would have been born a woman. My mother once told me she would’ve named me Laura.”

Transgender Dysphoria Blues is Against Me!’s first record since Laura came out as transgendered nearly two years ago, and puts former subtexts at centre stage. Unsurprisingly for an album built on these themes, TGB sees Laura’s fixation with the bodily collide head on with her visceral best: “you’ve got no cunt in your strut / you’ve got no ass to shake… you want them to see you like they see every other girl / they just see a faggot”, she sings in the album’s opening title track.

Better words can (and will) be written on Laura’s courage in being one of the first punk stars of prominence to speak openly on these issues, and how important this record is going to be to a huge number of underrepresented and stigmatised people. But to speak from the more self-interested perspective of a mere Against Me! fan, the new sense of focus also gives Laura’s performance a verve we haven’t heard from her in years.

After moving to Sire from Fat Wreck Chords, Against Me! became a shade defensive; borderline apologetic towards the kids who resented the move to a major. This record regains a lot of their former attack. Songs like ‘Drinking with the Jocks’ see Laura spit venom through verses loaded with pussy and come, backed by a brilliantly unrestrained musical performance. And while closing songs on Against Me! records have had a tendency to be reflective warm-downs, ‘Black Me Out’ puts its foot down further on the throttle: “I want to piss on the walls of your house / I want to cut those brass rings off your fat fucking fingers”, she roars across expanding textures.

It's a shot in the arm, then, though not a complete return to form. While a lot of these songs demonstrate more urgent songwriting than we’ve heard from Grace in a while, many of them still get stuck in the band’s recent ruts. The seemingly endless chorus of low-point ‘Unconditional Love’ swings through its insufferable bounce for what feels like hours, even including a hokey "ONE MORE TIME!" from Laura in its final go round. And although this the worst offender, it’s far from the only song to fall prey to lazy, flat-pack structures.

Laura’s remarkable status as a transgendered frontwoman for a long established punk act is undoubtedly the record’s biggest asset. Some might sneer at this context being used to prop up a critical evaluation, but its effect goes beyond simple admiration for her bravery – the thrill of raw honesty invigorates these songs. This, after all, is what put the power into their earliest records as well: the unblinking earnestness with which their anarcho-DIY sensibilities flowed through their songs. Today’s focus may be different, but the effect achieved is the same.

Whether or not this comes to be viewed as a true ‘event album’ for giving a stadium-sized voice to an oppressed minority remains to be seen (quality-wise, some of these songs might struggle to bear the weight, you suspect). But it certainly deserves to be recognised for more than its singularity. Transgender Dysphoria Blues demands a more visceral reaction than mere respect. These songs have just as much heart as they do guts, and the LP stands as Against Me!’s first forward looking album since Searching For A Former Clarity. New Wave and White Crosses twitched with anxiety; loaded with mealy-mouthed justifications for career choices and shifting politics. But as Laura sings in the most apposite line of 'Transgender Dysphoria Blues': “there’s a brave new world raging inside of me”. For the first time in nearly a decade, there’s little space to doubt her conviction.