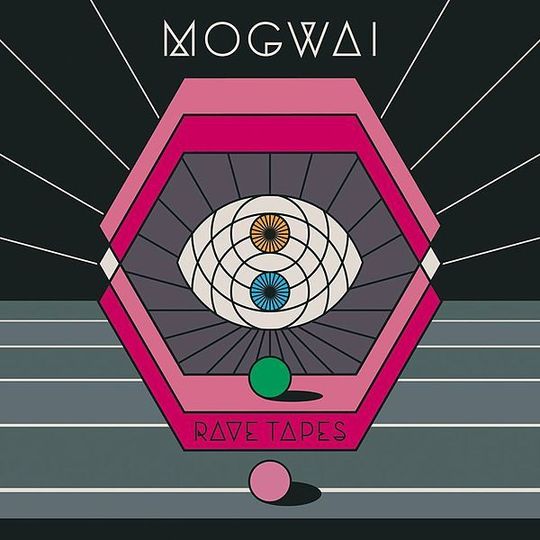 As ever with Mogwai, we shouldn’t read into the name. Sure, the title Rave Tapes might hint at a departure for the Scottish five-piece, their backs turned on the furrow of dense and misanthropic post-rock that they’ve ploughed for nearly two decades, exchanged instead for glowsticks flailing wildly in the air, but we’ve learnt by now not to take them on their words. Their words, as the band’s song titles have been demonstrating for years, don’t really mean anything.

But 'Remurdered', last autumn’s first taste of this album, did seem to promise something different. Mogwai have done driving and portentous before, of course, but this upped the game, welding massive Errors synths to those coiled riffs and forming something urgent, something vital and compulsive - heck, it was danceable, and as anyone who’s ever stood at one of Mogwai’s live shows wondering what to do will attest, that’s pretty damn huge.

Of course a lot of people hated it. And yes, it is a drstic departure from what Mogwai do best - but when you’ve made Les Revenants, the soundtrack to last year’s French TV show of the same name and widely feted as one of the most atmospheric collections of music released there’s not much further down that path that you can go. Forging a new one, then, seems the logical option.

Oh, aside from standing still - there’s always that. And not far in to Rave Tapes you realise that’s kind of what Mogwai have done here: that 'Remurdered', with all its brooding rhythmic intensity - like a dancefloor at a crime-scene, bodies writhing by the chalk lines and strobing in the forensic flashes - is an anomaly, a false harbinger for change that isn’t here.

That’s not in itself a bad thing, of course: even eight studio albums, two soundtracks and ten EPs in, Mogwai’s sound still stands alone, a testament to what guitar bands can do when they don’t try to be guitar bands, when they find that gossamer line between beauty and menace, between fragility and staggering, convulsive noise. Too few artists realise that to cast shadows takes light. But whilst no-one would want to see the band take a complete volte-face, more than a handful of people will come out of the end of the 50 minutes here wondering if that sense of déjà vu is wholly satisfying.

That doesn’t mean there isn’t a lot here to like: indeed, Rave Tapes is possibly Mogwai’s strongest collection - Les Revenants notwithstanding - since Mr Beast, and an extremely solid distillation of their enduring appeal. 'Hexon Bogon' snarls with characteristic sociopathy, all pealing riffs and squalls of distortion, whilst 'Deesh' does epic and grandiose, Martin Bulloch’s drums pounding militaristically behind like the accompaniment to slow-motion propaganda, all sweat and vigour and desperate final push. 'No Medicine for Regret' does pathos as only Mogwai really do, driving melancholic piano through a maelstrom of reverb and distortion, a calm within the storm, whilst 'Repelish' returns the band’s idiosyncratic humour, welding interview audio from a guy troubled by Led Zeppelin’s backward-masked Satanic messages to a magnificent assemblage of bubbling electronica and sliding, interweaving riffs - marrying the most accessible track on here to the vocal "You’ve Got to Live for Satan". A lot of people seem to hate that one, for some reason.

But it’s hard not to see the album overall as something of a holding pattern, a collection that maintains everything the band does so well without really furthering it in any particularly meaningful way. Sure, there’s the synths and the subtle electronics, but in context they’re a footnote, a nod to a possible future lost amongst all the nods to the past - those familiar warped and pitch-shifted vocals from closer 'The Lord Is Out Of Control', that 'Cody' drawl to 'Blues Hour'. It’s not that Rave Tapes is disappointing, it’s just underwhelming - but it’s beautiful enough that maybe that doesn’t matter. Maybe. Next time though a bit more living for Satan might serve Mogwai well.