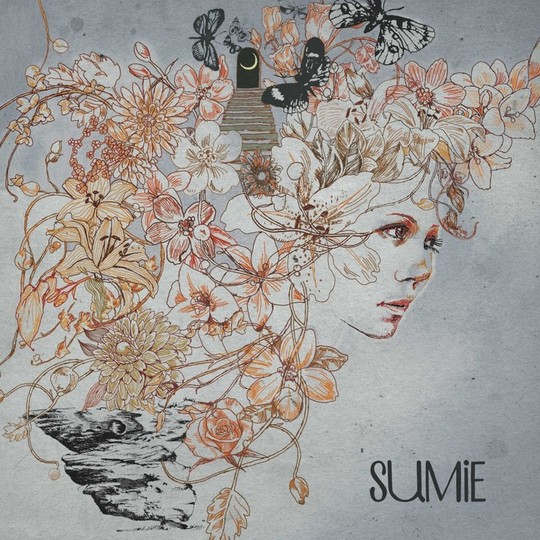 'Minimal' is a word which doesn’t do justice to Gothenburg-based Sumie’s self-titled debut. One of the most noticeable and instant things about this record is that melodies are Sumie’s strong point, and are emphasised in a great number of places - in fact from start to finish. There is very little which gets in the way of, or has greater prominence than, Sumie’s vocals - the slow-paced ‘Hunting Sky’ is just one of numerous examples of a simple and well-written melody going a long way. The vocal range shown here is not that great, and the lyrics sometimes seem more spoken than they are sung, but that is more evidence of the serenity and gentility of her voice than a meek approach to singing.

The self-titled Sumie works incredibly well as a whole, with the tracks fitting comfortably and evenly between each other. The similarities between them, however, are difficult to ignore. Perhaps this is partly due to the fairly sparse instrumentation used, with layered vocal tracks being the main manner in which density (however relative) is created. Fortunately, Sumie does not last long enough for this familiarity in sound to tire; 10 tracks and just under 34 minutes representing a healthy introduction to the Swedish singer. When additional instruments are introduced, like the peripheral and minor additions to ‘Speed Into’, you do notice them, and they also add something else to the bare bones of acoustic guitar and voice present throughout.

An issue with the relative lack of variation is that the essence of Sumie as a musician is and could be accurately conveyed in five or so tracks – say an EP-length collection – and the remainder does not appear to add depth, or do anything beyond expectations. That is not to say that some of the tracks are in any way weaker – if anything each track is as strong as the next – but that a more adventurous and varied path could have been taken. Closing track ‘Sailor Friends’, with the vocals this time muffled and proceedings at a strolling pace, is the only track which feels in any way different.

In terms of how the album sounds, the fact that it was recorded in Nils Frahm’s studio with Dustin O’Halloran is a bit of a red herring. If you tried particularly hard you could say that you can hear appropriate references, with the occasional ambient hum and the space between the instruments but, really, that could be said for any number of records this simple in composition. The clarity and sparseness present are a nice and warming touch, though.

As self-titled debut albums go, Sumie is a perfect introduction to the woman as an artist. Stylistically it is minimal, but this is the one thing which allows the listener to understand what she’s all about. As a whole it is an album which is far more likely to gradually make an impression than stun you on first listen, but instant gratification is rarely a positive.