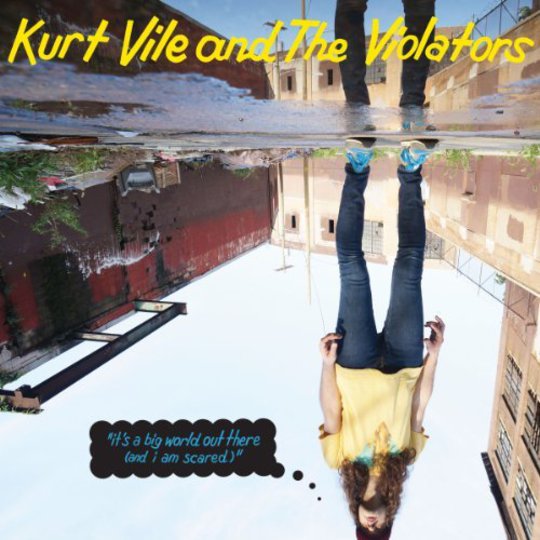 Kurt Vile has bought a synthesiser, and he wants everyone to know it. The Philadelphian chap’s new EP, It’s a Big World Out There (And I Am Scared) collects various offcuts from this year’s Wakin on a Pretty Daze album and chucks them all together, creating a big pile of Americana that is so hip sounding it could probably unite Uncut and Pitchfork readers, which in music writing terms is like uniting Israel and Palestine, probably.

It doesn’t take long for the synth to rear its head. Opener ‘Never Run Away (String Synth)’ adds a kind of Phil Spector vibe to proceedings. Though it is essentially just ‘Never Run Away’ with a bit of electronics layered over the top of it, it feels fresh, and gives the song a completely different, uplifting spin. It makes me wonder if every song could be improved by adding some keyboard wurrs. 'Venus In Furs' with screaming electronic stabs? It would be great. 'Waiting Room' with an ice cold robotic purr? Couldn’t be anything less than spectacular. Yep, it’s been decided, every single record could be improved by a little bit of synth.

‘Wedding Budz’ (a.k.a. 'Air Bud') takes this whole synth thing to a new level, managing to cram in shedloads of that nocturnal sound that can transform even the coldest of English nights into a sweaty summers' eve in the US of A. What becomes apparent is that these songs feel like improvements on the originals, rather than just alternate takes, which is what elevates this EP from the bonus disc scrapheap and into your proper collection.

Looking at it cynically you could say this EP is just a way of Mr Vile to get a bit more cash in for the holiday season, so he can shower his friends and family with gold, frankincense and myrrh. Whilst this might be a factor it doesn’t take away anything from the sheer quality of the record.

Towards the back end a few new tracks are chucked in. The first of these, ‘Feel My Pain’, is a departure from Kurt Vile’s current sound. There’s more than a whiff of Thom Yorke in the haunting guitar plucks and twitchy rhythms, but that’s not to say that is doesn’t sound like Kurt Vile. It doesn’t sound like Wakin on a Pretty Daze Kurt Vile, but it still sounds like Kurt Vile, a lot, which is always nice when you’re listening to a record by Kurt Vile.

This isn’t the case with the other newbie, ‘The Ghost of Freddie Roach’, which sounds very much like Wakin on a Pretty Daze Kurt Vile. It’s all trippy and repetitive and stuff, like Spacemen 3 if they fiddled around with the acoustic guitar more often. It's drug music you don’t need to take drugs to, to enjoy, which is the best type of drug music, and certainly the cheapest, and that’s what’s important kids.

It’s a Big World Out There (And I Am Scared) has taken Kurt Vile to new heights, proving that his offcuts and extended versions are infinitely better than most bands' singles. The bloke is here to stay, and thank God, we need an antidote to the generic slacker crap. Release extended versions all day long Kurt. We’re listening.