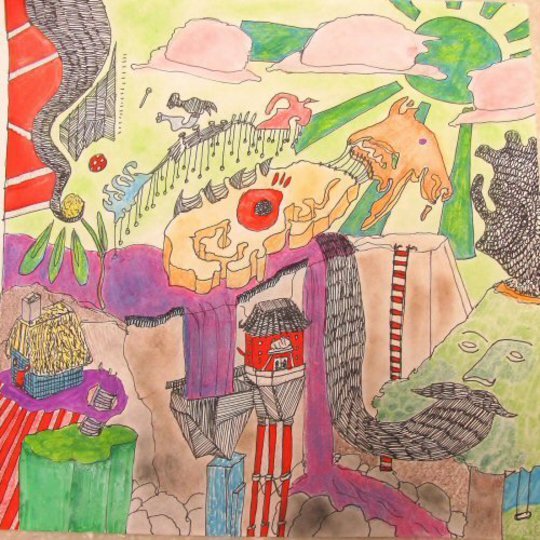 Seventeen-year-old Kiran Leonard has brewed up an internet fuss. Inspecting the components of said fuss, it appears he has done so primarily by being a 17-year-old who has brewed up a fuss. It all works in reverse order, these days.

Still, here’s a question: at a time when the world and its musical wonders dangle within fingertips’ reach, why listen to some pepped-up wet-nosed Oldham teen run the gamut of emotions from arrogance to bravado? Wouldn’t that be silly of us? Sure. But, thing is - well, it wouldn’t actually, no. Why should grandiose indie rock forever remain the preserve of balding Scrabblers and their autumnal anti-glamour? The genre needs hip young hellions to rattle things up.

Kiran Leonard makes manic, rippingly good music. He plays drums, mandolin, kitchen appliances - all with vivacious clamour. There are handclaps and grand harmonies, sometimes the rustle of turning pages. There are, by his admission, mispronunciations galore - “Nite-zsche”; “lite-motif” - the curse of the autodidact. He pinballs between inebriated local towns and alien abduction, and he wails precociously of “Burrrgh-unswick Street - that’s where the paupers meet”. I’m not quite sure he gets away with it.

But something he wisely avoids is youth. The teenager savant penned frenzied highlight ‘Dear Lincoln’ aged 14, but there is no fragility, no self-discovery or angst, no warm sticky trickling under discussion. And that’s revealing, the rejection of adolescence. For Leonard is not an excellent 17-year-old songwriter but an excellent songwriter who happens to be 17. And any youthful folly in the music is moot, because there is only so much as exists residually in any of us.

Leonard cites influences from Sufjan to Newsom, Ayler to Zappa. Bowler Hat Soup’s second half sprints those tall aisles of ambition like a hungry child with a shopping trolley. Take ‘Oakland Highball’, a yappy microprog number that skitters along psych-pop bannisters and space-opera highwires before - suspended in drumroll - vamoosing sharp down the helter-skelter melody of ‘Dear Lincoln’, reprised to hair-raising effect. Look contrastingly at ‘Drysdale’, which floats from a Modest Mouse waltz to a Dirty Three whirl to a climax of Beirut bells and whistles.

While the fritzing mashup of styles mimics the polymania that Van Dyke Parks favoured on Song Cycle, Leonard’s voice is more conventionally overwrought, a homage to Rufus Wainwright and close cousin to Luke Temple. Perhaps, like most young dudes, Leonard underestimates in his delivery the listener’s ear for subtlety. But it’s refreshing that the northerner is not shy about massive self-expression; besides, his lyrics are merely extravagant, not indulgent.

Leonard is musically jubilant, moderately self-deprecating and, one suspects, fully aware of his talent’s limits, but conscious also that that ceiling, precarious as it is, won’t long withstand the battering of his rapid ascent. Yes, certain song structures collapse, and sure, the early-middle stint drags. Who cares. The guy may not be a genius who happens to be 17, but for now, he’s no doubt a 17-year-old genius.