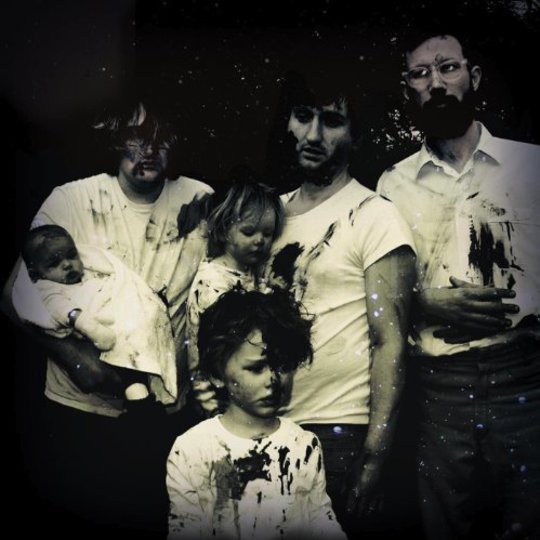 Always the wilful outsiders, The Young Knives may have finally over-egged the artrock pudding. On first listen, Sick Octave, the fourth album from the Ashby trio, is a gimmicky mess; there’s the singing toddlers, the discordant organ noises, the baby crying, the atonal vocals, ambiguous words and - seriously - the car horn that toots, apropos of nothing, about two thirds in. Quite naturally you assume they’ve finally gone off their rocker. You should never dismiss a record on the first try, though: further listens cause the barometer of critical appraisal to swing the other way - maybe this is original, artistic, and admirably off-beat? Unfortunately another run through, and you’re back to thinking it’s mental; or worse trying very hard to convince you of its eccentricity, like the office prankster with the novelty ties.

The truth lies somewhere in between. Sick Octave is by no means a bad album, it might even be the best work this always likable band have yet done, but it’s not without its problems. You have to deal with the window dressing before you can get to the good bits; the toots and the wibbles, the squelches and the sound effects. They’re largely unnecessary, at best they’re making great songs deliberately difficult, at worst they’re grouting the edges where the joins don’t quite fit. The 'we’re dead mad, we are' sheen acts as a barrier to the rest of the record, deflecting your attention. Sick Octave is always at its weakest when it tries too hard. The last third of the album is marred by the purposefully sloppy jazz of ‘Green Island Red Raw’, while ‘Bella Bella’s locked in, mesmeric groove is spoiled by the yapping “yayayayaya” vocal line. These are all tricks that, for example, 13 era-Blur could get away with - the Young Knives just don’t have the panache.

It’s a shame, because if you can get through the self-conscious awkwardness Sick Octave will reward you and then some. Once some pointless, but yes, alright, quite cute kiddies count the album in, ‘The Owls of Athens’ pushes it to a cracking start, all throbbing, vintage synths spiked with jazz trumpet. It’s topped by ‘We Could Be Blood,’ opening out from a reverby, Sixties guitar into a gorgeous, downbeat chorus, while a baby’s cry runs through the icy, atmospheric ‘Preset Columns/Default Comets’ at the very centre of the record - one of the few moments where the window-dressing works - it’s genuinely unsettling.

The Young Knives have always had a thing for the more awkward end of post punk, but Sick Octave’s debt to PiL goes deeper than before - the middle third of the record is dominated by sharp angles and a metallic melancholy, with Henry Dartnall echoing John Lydon’s tendency to pitch his singing just outside of his comfort zone making for a compelling and disquieting effect. It works - ‘Marble Maze’ is brilliant, Dartnall playing out a failed memory game in which he reflects sadly on ”the things that I don’t know”, meanwhile ‘Bed Warmer’ harks back to the band’s earlier spiky, weirdo pop and closing track ‘Maureen’ might be the best thing they’ve ever done; a sweet story about helping the pretty girl across the corridor, that becomes more unsettling as it goes along, Dartnall's voice again pinching Lydon’s uncomfortable keening.

The Young Knives score a pass this time - another band might be drowned out by the extra layer of production sauce here, and the trio already have enough eccentric character of their own without adding it artificially. Fortunately they’re likeable enough to pull it off -just - and their melodic and emotive instincts are strong. In the end it’s good songwriting that saves Sick Octave from itself.