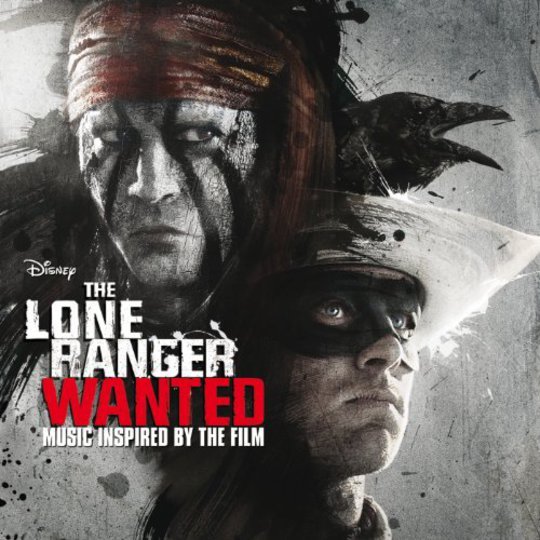 The Lone Ranger is a hit and miss film. It’s genuinely fun, beautifully dressed and the action sequences are thrilling. It has an unnecessary bloodlust, probably to pitch to an older audience, which is a mistake. It would have benefitted from taking a universal rating, hamming up the comedy and making it a child friendly offering.

Something similar could be said for the music. There's an OST, more than competently arranged by the maestro of film Hans Zimmer. So why ‘inspired-by’ soundtrack Wanted is required is a mystery. It’s an outreach to another market that it isn’t really needed. All these tracks are original compositions, apparently directly inspired by the film and yet are similarly hand selected by the director Gore Verbinski, which adds to the confusion on this. As an exercise in Western-style compilation though, this is great fun.

There are a good number of highlights. For example it’s always a pleasure to hear Iggy Pop and when he turns his gravelled tones down into a lower, soft croon over the lulling waltz of ‘Sweet Betsy From Pike’ it’s moving and complemented by suitably brash production. Whips snap and mouth harps ‘boing’ - it half feels like it should be a disaster but it rolls so gracefully that, almost, you feel Iggy could have been even more prolific if he’d pursued a career in country, or at least gone through a line-dance period.

Dave Alvin is a Grammy award winning American artist, revered in his native country. His track, ‘Lonesome Whistle’ shuffles a sweet seduction. If you want to indie it, sure, it’s Lambchop and/or Smog, but it’s more than these guys. The lap-steel guitar rolls out like sunshine and the guitars tinkle over a country beat that is locked on a one-way track.

John Grant’s track, much like the man himself, is remarkable. His 'Saddle the Wind' is a lullaby worthy of a film in its honour. Describing an estranged, yearning relationship its mix of organs and vocal keyboard pads is a note perfect, ebbing, exercise in hope and love. It paints a black night at the point where the dawn isn’t yet seen, but certainly felt. For its chorus it ponders: “If I could, I saddle the wind/Some starry night, I’d saddle the wind/And straight to your arms, I’d blow”. Disney and Pixar can’t make something this direct, life affirming and touching no matter how many special effects and millions they throw at a project. And all this is just over two and a half minutes.

Whilst this soundtrack won't necessarily inspire a re-watch the film in a Pink Floyd/The Wizard of Oz style, if it were available over the film as a DVD extra, sure, maybe. It might even be more entertaining than the original and possibly help paint its grown–up elements more convincingly. Until then this remains a somewhat baffling marketing exercise, though a pretty enjoyable one.