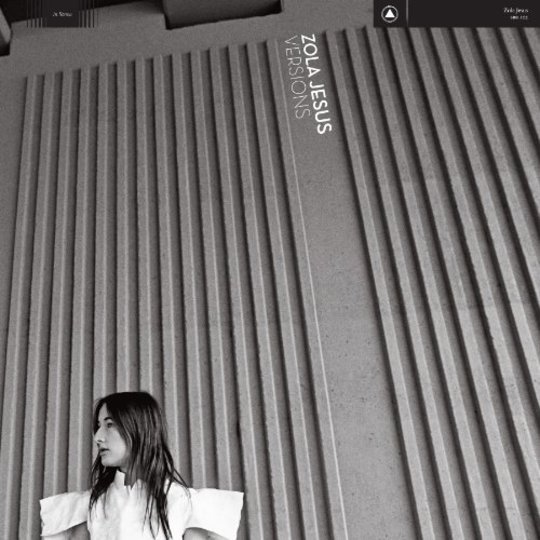 Nika Roza Danilova, who essentially is Zola Jesus, has had a fairly wide ranging musical career. Originally training as an opera singer, she turned her back on Wagner and Verdi and forged her own path in the electro-goth avant-garde, lending her considerable lung power and musical vision to a prolific range of releases including a split with Burial Hex and a collaboration with LA Vampires. With the breakthrough release of Stridulum II in 2010 Danilova changed tack again: channelling her powerfully distinctive voice and arrangement skills to a series of anthemic songs which rapidly expanded her fan base.

Versions, then, is an eagerly anticipated record that takes songs from Stridulum and its follow up Conatus and reimagines them in collaboration with the JG Thirlwell, a man with decades of experience involved in musical collaborations with the likes of Nick Cave and Lydia Lunch, not to mention his own bands such as Foetus. The possibilities for collaboration between these two on paper seem enormously exciting and it is disappointing to report that, although Versions does have a lot of things to recommend it, it falls well short of the potential for such a collaboration.

What Thirlwell has done with the Zola Jesus songs is to leave Danilova’s vocals intact but to, for the most part, substitute tactful and tasteful string arrangements from the Mivos Quartet for the trademark Zola Jesus thump-and-surge electronic accompaniment. The net result of this high gloss film score treatment is to make each song sound rather more safe and approachable than its original incarnation: this is a Zola Jesus dinner party record.

It would be unfair to say that it never works however: on ‘Seekir’ for example the original thrust and forward momentum of the song is maintained as the violins swoop and soar above Danilova’s head. The final chant from ‘Night’ of “Yes in the end of the night / When I can be with you” also retains all of its considerable spine-tingling power in this incarnation. And if the version of ‘Run Me Out’ sounds rather tidier and more palatable to the mainstream, that does at least leave open the possibility that someone at Sky Sports will use it to soundtrack an Ashes slow-motion montage of batsmen failing to dive into their creases.

Versions isn't a triumph but it does highlight just what a striking talent Danilova is. It is testament to the strength of her songwriting that songs like ‘Sea Talk’ (appearing for its third incarnation on a Zola Jesus record) can work so well regardless of the musical clothing that they are dressed up in. Because Danilova has such a powerful and distinctive voice it is easy to overlook the other half of what she brings to Zola Jesus records: the music. Better versions of these Versions exist and those versions are Danilova’s own.