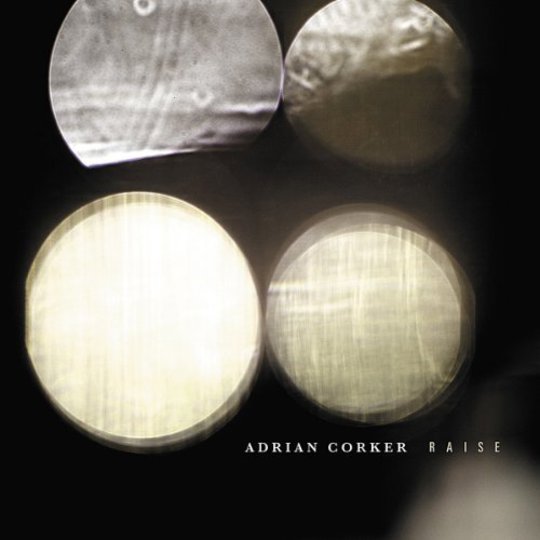 It’s always somewhat dangerous to over-emphasise a lack of coherent planning in a record. In the case of Raise, the new effort from electronic / soundtrack artist Adrian Corker, knowledge of the improvisational approach on offer explains a lot, perhaps too much.

Bookended by two delicately played solo piano pieces, Raise is predominantly an ambient excursion into the realm of gently experimental sound art. Crackles and hisses abound, and there’s a distinctly irregular gloom to the mix. This is ostensibly the result of being recorded in a wide variety of locations (from the lo-fi surroundings of the local pub to the comparative opulence of Valgeir Sigurðsson’s Greenhouse Studios) but one senses that equally to blame is the inconsistent instrumental paths taken over the middle seven tracks. There are hints of classical and jazz dotted throughout, largely thanks to Corker’s variety of collaborators, but all are weaved together in an attempt to create something of a unified textural character.

In a sense, this is what leads to Raise being such an underwhelming listen. In the absence of prolonged drones or fully coherent soundscaping the pressure is on the subtleties of the playing to provide interest. On a track such as ‘Circle Song’, which features Portico Quartet’s Jack Wylie on sax and Milo Fitzpatrick on double bass, there is enough interplay between the players to accentuate the strengths of Corker’s minimalism. At other moments, like on ‘Raise Pt. 2’ there simply isn’t all that much to take note of. The subtlety is such that the human element to the sounds is muffled and, at least on early listens, lost altogether.

The impression given by Raise then is, even for devotees of the ambient scene, decidedly mixed. It’s hard not to feel at points that Corker is making his life more difficult here. Yes, there is worthwhile work to be done with improvisations and the utilisation of different recording techniques and locations, but too much of the time Raise fails to make the most of these aspects of its creation. Lengthier tracks fall prone to feeling oddly static whilst, in contrast, the intriguing tape manipulation exercise that is ‘Unfold’ is given less than two minutes to make an impression.

Strangely the aforementioned piano bookend tracks, ‘First Light’ and ‘Interdependence’, therefore end up being two of the most successful on the album. They are both displays of the human touch that is so missing from much of the rest of the record. ‘Interdependence’, as album closer, serves both to emphasise the emotive bent that Corker can add to his work, and to further illustrate how significantly the rest of Raise often fails to reach the same level in that department.

Ultimately this is an album with admirable intentions, and some pleasant moments, but it takes too many listens to make its strengths known. It’s hard to be much more than lukewarm about its contents. Corker has endeavoured to merge his soundtracking skills with an approach less befitting of that stylistic bent, prompting Raise to exist as a disappointing unbalanced portrait.